This Edison short was shot on location and purports to be an actuality film, although it’s hard to be sure whether it was staged or not. It shows the increasing flexibility of the early cameras used in the United States. 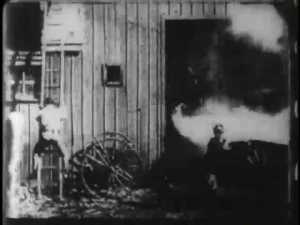 We see a pair of barn doors with smoke billowing out. Men in fire helmets run out of the barn, leading horses, they are followed by men in civilian clothes, also taking out horses, and at last a man drags a large wagon behind him. Each person runs with his charge to one side or the other of the frame and leads them offscreen.

While it is possible that the Edison company camera crew heard a fire engine and followed it to an actual burning building, it also seems possible that they set this up in advance and used a smoke generator of some kind. It’s hard to say which would be easier – certainly given their ability to recreate blacksmithies and barber shops, it would seem possible that they had some fireman suits on hand, but the smoke effect would take some work and might not have been in their capacity. The original catalog entries refer to the action of the scene and the “realistic effect” of the smoke – although this kind of language doesn’t necessarily indicate that the smoke was faked, it is just the way the promotional materials spoke of moving pictures at the time. No doubt the narration that accompanied the film would provide more context, but probably would leave the question muddy.