This is a reenactment of a current event done by Georges Méliès in a studio. Similar to “The Dreyfus Affair,” Méliès created a kind of newsreel by having actors portray action from newspapers in motion for the screen. 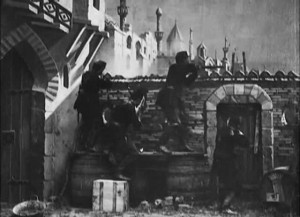 We see a fairly small stage, showing the interior courtyard of a fort with four defenders, who are firing over the wall at an unseen enemy. Soon, the enemy breaks in through a gate, and the defenders run inside a building (exit stage left). The attackers, who we can see are wearing fezzes, run in through the gate and find their way blocked by a locked door. Most of them run back out the gate while a demolitions man places a bomb on the door to the building. It explodes and the attackers run back in, an officer urging them on as bullets start to fly from inside. The officer is hit and goes down but the soldiers press the attack as the movie reel ends.

This movie is quite action-packed, and like action films ever since, no one is ever seen to reload, although we see impressive bursts of smoke from their guns. The event it portrays is a scene from the Greco-Turkish War of 1897, which would for European audiences invoke the image of a Christian nation besieged by Muslim invaders, a common theme in literature and history. Méliès dispenses with his fanciful set design to make a quite realistic fort set, although to any modern viewer it is still obviously a set. Great care also seems to have gone into the uniforms of the Greeks and the Turks. As far as watching it today, it’s important to remember that it would most likely have been accompanied by live narration that explained what was on the screen and also that an audience in 1897 would probably be familiar with the situation from reading the newspapers. Viewed in silence, without context, it doesn’t seem to “mean” much to us today, but it would have been quite thrilling at the time.