This is another early “dream sequence” film from Georges Méliès, in which he uses the camera to represent “impossible” events that would have been challenging at best on the live-action stage. Made in the same year as “A Terrible Night” and “Card Party,” at this point in time his aesthetic is more clearly defined. 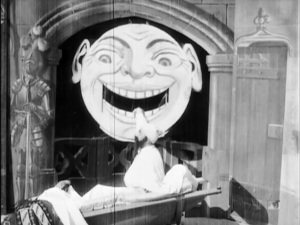 We see a man on a stage, in bed, thrashing about agitatedly. Suddenly the background changes from a modern look to what seems to be the interior of a castle, and a young woman is sitting on the edge of his bed. He leaps up excitedly, but when he goes to embrace her she disappears and is replaced with a man in blackface, dressed as a performer in a minstrel show, playing banjo. The new performer dances about on the bed, breaking it, and the man tries to grab him, but he disappears also and is replaced by a white clown or Pierrot figure. Now the background has changed again and there is a balcony visible through an arch, and the moon hovers smiling over it. The clown leaps outside and gestures to the moon before dancing off. The sleeper points at the moon, and suddenly it appears just outside his window, and bites his hand with its large mouth. It hovers there, laughing, and the man gets up and hits it in the face. Now it jumps back to where it belongs in the sky, and the three figures of the clown, the minstrel, and the girl appear on the balcony, dancing and mocking. The man tries hiding in his covers, but the trio come inside to  torment him. Suddenly the background changes back to what it was in the beginning and the dream figures disappear. The man looks around, relieved to find it was a dream (his bed is still broken, however), then decides to roll over and go back to sleep. 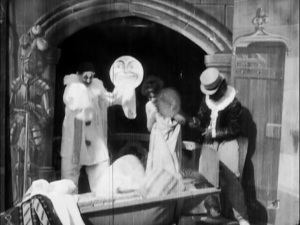 I was recently asked what the “first dream sequence” in cinema was, and I think this is a good contender. While “A Terrible Night” is somewhat unclear as to whether it takes place in dream or reality, this one gives us the framing of the man in a different setting to show where he goes to sleep and wakes up, thus establishing  the dream and its parameters. As always with “firsts,” it can be hard to be certain, and depends to some degree on how you define the term. Similarly, one might make a case for this as among the “first horror films,” but I think I chose to skip it in October because the dream aspect makes it not really an exploration of the supernatural but simply, as the title suggests, a nightmare. I spoke of the “Méliès aesthetic” above, and that is most clear from the animated moon, which of course we associate with his most famous film, “A Trip to the Moon,” but it was also a recurring theme in Méliès movies. Also the people and objects appearing and disappearing at random to torment a protagonist would be a frequent theme. According to the Star Films Catalog, this was #82 in their list of over 400 films, and was still available in 1905, suggesting that it was quite successful with audiences, even after they had more sophisticated fare to choose from.