This one-reel version of the oft-filmed story from Thanhouser represents an early effort to bring horror and special effects to the service of a sophisticated narrative, but uncertain history swirls around the movie nonetheless. Florence LaBadie and James Cruze star in this version of a man who separates the good and evil of his own nature with tragic results. 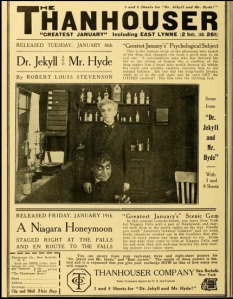 The movie opens with a shot of what seems to be a medical journal, citing a doctor who claims that drugs can be used to “separate man into two beings,” one good and the other evil. Then an intertitle tells us that Dr. Jekyll plans to confirm this before we’ve been introduced to any of the characters. Finally, we see Jekyll at work in his laboratory, mixing chemicals. When he’s finished, he tries the brew and (no surprise to us) a dissolve replaces the kindly old doctor with a monstrous brute. Hyde, however, doesn’t seem to want to hang around and celebrate his success. He just takes a drink from another beaker and turns back into Jekyll. The next intertitle sets up his betrothal to Florence LaBadie, “the minister’s daughter,” and, indeed, we see the two of them out for a stroll on a lovely Spring day.

Then, months flash by and we learn that his repeated use of the drug has caused Jekyll to lose control of his transformations. We see him reading at home when the change comes over him on night. This time he smashes a few things at home before going out into the village and wreaking havoc, scaring small children and lurking about menacingly. One day, as he’s visiting his fiancee, we see him rush off in the middle of the conversation as he feels the transformation begin. Hyde attacks her and kills her father, but she summons a policeman who chases him back to Jekyll’s house, where he takes the drug and “hides” in his alter-ego. Jekyll now knows that the end is near, that the next transformation will be the last, and he goes to say goodbye to his sweetheart. Again, however, he must leave in the middle of the conversation because on his uncontrollable change. He goes back to his lab and locks himself in, but there is no more formula to change him back. He becomes Hyde and starts wrecking the place, the butler summons the police who go after the door with a fire axe, but Hyde cheats them by taking poison and killing himself before they can capture him.

I thought this was a pretty good version, for a less-than-12-minute adaptation of the stage play. The transformation effect is a simple dissolve, but it’s done well and the Hyde makeup is good enough that people have debated for years about which actor was under it (more on that in a minute). I found LaBadie good in her minor role as the fiancée – we can see her emotional state as she goes from love to concern to horror to mourning all in a very short amount of screen time. Cruze as Dr. Jekyll is the model of a proper, controlled, Victorian middle-class professional, and the simple visual style works as we get a good alternation between interior and exterior locations. The scene of the final rampage is intercut with the policeman’s efforts to break in and raises the tension effectively.

Now, there’s some doubt as to who played Mr. Hyde. Most internet sites, including imdb and thanhouser.org say that it was Harry Benham “in several scenes” without further comment. However, a 1997 article by C. King* clarifies this somewhat, saying the following:

Harry Benham played the father of Jekyll’s fiancee. In A Pictorial History of Horror Movies, Denis Gifford reports that in 1963 Benham claimed to have played Hyde as well, asserting that Cruze only played Jekyll. Gifford gives no source for this anecdote, and, more important, Benham’s claim would not have appeared in any contemporary record. As all the people involved are now dead, it is almost impossible to confirm. After his examination of the film, Roy Kinnard concluded that Cruze did play both roles. My own viewing leads me to conclude the opposite. There is no way to resolve this claim.

Well, I think I have a resolution. It was Cruze. Here’s why: there’s a scene in which Mr. Hyde, looking like he has throughout the rest of the picture, kills the father of his fiancée by strangulation, and the technology of 1912 would not have allowed this. Benham could not possibly have played both roles in that scene, and if he didn’t there, he didn’t in the rest of  the movie. So much for Gifford, and so much for imdb. There are still a number of other inaccuracies at thanhouser.org to clear up, however. They claim the movie was made “at least nine times” during the silent era: King counts no less than 22 silent versions (OK, technically they’re still right, but why understate the case?). They claim this was the second US version after Selig, but King lists a 1908 Kalem version as well. Finally, they make the utterly ridiculous statement that, had Benham actually played Hyde, it would have been “[p]erhaps unique among all Jekyll/Hyde adaptations.” Apparently “Dr. Jekyll and Sister Hyde” doesn’t count? Not to mention “Dr. Jekyll and Ms. Hyde” . Anyway, since Benham didn’t play Hyde the point is moot.

You can watch it for free: here (no music), or here (with an organ score, but I couldn’t get it to enlarge the screen).