I found this comedy by Alice Guy a bit confusing – it could have used a few explanatory intertitles to clear things up – but it does stick to some of the themes we’ve seen before, including the plight of the poor, objects that seem to take on lives of their own, and the streets of Paris. Once again, the performance of the main actor manages to make it funny, even when it’s not entirely clear what’s going on. 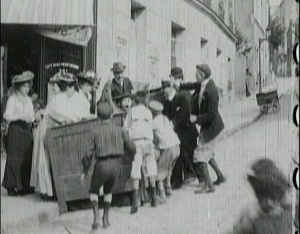 The movie opens on a stage depicting a poor man’s apartment. The landlord is there, and he shows him papers. When the man turns out his pockets to show he can’t pay, the landlord walks offstage and brings back a policeman and another man I think might be a bailiff. They instruct him to get out. He begins clearing away his furniture, but the largest object is a huge wooden bed. Finally, he pulls the bed offstage. The next shot shows him pulling it out the front door of a building and onto the street. It is much larger than him and difficult to move, although it is on wheels, which helps at first, until it starts rolling down the hill after him. He manages to get it to stop in front of a café, where it causes quite a commotion, with people running up to see it and pulling at the sheets, mattress, and pillows. To defend his property, the man gets into the bed, but this only seems to delight the crowd more, and it keeps growing until two policemen come up and push the bed along, seeking to clear the crowd. Once they get it going with the man on it, it keeps rolling of its own volition, with no control.  It takes the man down a staircase, knocking over a pole at the bottom, and then rushes towards a large wagon on a track, piled (I think) with coal. The man and bed roll off after the cart (you can actually see a locomotive pulling it but I’m not certain if that’s intentional), but the next cut takes us to a street where the bed is rolling alone toward a line of policemen assembled to stop it. The bed knocks them all down, and they are then chased by local dogs. The next street shows a store with various pieces of furniture out front. A man distracts the owner while a group of ruffians jump into a large cabinet, a wardrobe, and a grandfather clock. These items then begin to “walk” away, before being hit by the bed. The owner, the ruffians, and various citizens now begin to fight. The movie ends without further resolution. 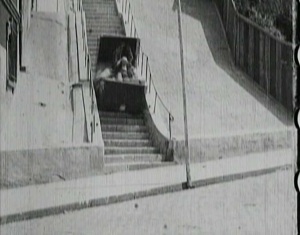 At first, I was confused by the eviction scene, because I thought the men would be there to repossess the furniture, so it made no sense for the poor man to take out the bed. It still makes no sense for him to take that, but leave all his other possessions, but I assume that’s part of the comedy. The part that still makes no sense to me is the apparent “theft” by getting inside tall pieces of furniture and then walking off with them in broad daylight. Would no one in Paris have noticed a grandfather clock walking along by itself? Finally, it’s confusing that there’s no final resolution for our hero – he speeds off the screen and then the narrative of catching the thieves takes over. It’s possible that some part of this movie is lost. A narrative attributed to the “Gaumont catalog” suggests an ending in which he has managed to procure a chauffeur’s uniform, and people assume that the bed is his car. At any rate, what we do have to watch is made funnier by his flailings as the bed rolls out of control. He looks like a clown, and manages some good moves which work even at the distance the camera is generally set. I always like these movies that actually use the streets of Paris, and it’s pretty obvious that most of the crowd is not made of actors, but just from kids and people that happened to be on the street that day. At one point, a worker passes close to the camera while shooting and looks directly into it – I’m sure he wasn’t a planned part of the movie. This gives a good chance to see the styles of ordinary people on the street at the time, and also a good look at some of the more sloped streets the city had to offer. The furniture store, with its wood-framed windows, is especially appealing. 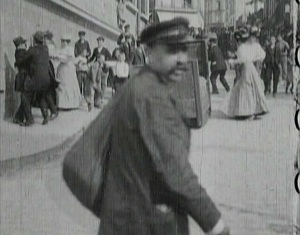 I doubt this guy was in the script.