This short comedy from Alice Guy also comes from her last year at Gaumont. She takes a familiar theme and runs with it, ultimately producing a movie that is reminiscent of “The Sprinkler Sprinkled,” showing that the basic elements of comedy don’t change, even as film technique becomes more sophisticated. 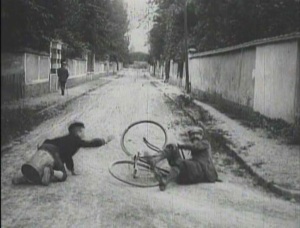 A man with a pot of glue is out in a park. He spreads some glue on a short pole and puts it in a tree. He starts to do the same with a second one, when a policeman runs out of the trees at him, causing him to flee. Now a small boy approaches the abandoned pot and takes it. He starts spreading it on various surfaces, laughing as he imagines what will happen. He puts it on some stairs in front of a building and a woman has to take off her shoes to escape. He puts it on a bench and two women are unable to extricate themselves, having to walk on their hands and knees when they try to get up, then they try crawling up the stairs and now their hands are stuck as well. He puts it on a bicycle seat and handlebars and the man is unable to get off his bike. Finally, as he laughs, the man on the bicycle knocks him over into his pot of glue. Now the boy has to crawl home with a pot of glue stuck to his butt. 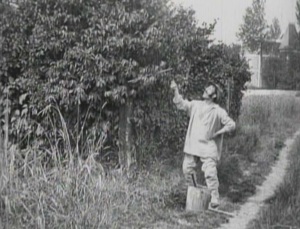 What the heck is this guy doing?

I couldn’t determine for sure whether this film or “Good Glue Sticks” by Georges Méliès was released first, but it’s likely that someone copied someone here. It’s not a straight copy, though, just a comedy based on a similar theme. The part I don’t understand is the fellow in the beginning with the poles in the trees. Was he setting some kind of trap for birds? Or just randomly gluing sticks into trees? It seems a very odd behavior, but not really illegal. If someone can explain it, I’d be very interested. I said above that this movie resembles “The Sprinkler Sprinkled,” and by that I mean that the comedy is dependent on us watching the mischievous boy, but then also paid off by seeing him get his comeuppance in the end. The audience gets to enjoy his pranks without consequences, however.