For this “context” post, I want to look at how exhibitors showed movies, and hence how audiences saw them, at the time under study. I’m not arguing that this is how these movies “should” be seen, or that there’s something wrong with us watching them today on cell phones, or high-definition TVs with Blu-Ray, or with modern music, or whatever. We live in the present, and the only way we can interact with the past is through that filter. Still, when asking ourselves questions about the past, like why a given movie was popular or why people in the forties thought silent comedies were “supposed” to run super-fast, it can be helpful to know something about how movies were seen in their original runs. 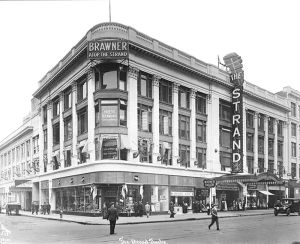 I’ve already written some articles about the transition from Nickelodeons to movie palaces. It’s important to realize that this didn’t happen overnight. By 1916, you just had a few “upscale” theaters dedicated to showing feature films. Usually these were in the downtown areas of major cities (or “destinations” like Broadway in New York City). Meanwhile, the neighborhood theaters and small-town theaters were upgrading a bit from their storefront Nickelodeon past. Instead of charging a nickel, most were getting 10 to 15 cents a seat. They had to build proper fire-proof projection booths, in order to meet the fire code. A lot were investing in more comfortable seating and better ventilation. Very few were showing the movie with just narration or a phonograph; most at least had hired a pianist (more on music a bit later). From being one-man (or woman) operations, these were transforming into small businesses, with ushers, ticket takers, concession sales, etc. These were the second-run theaters where the masses could see movies, and they often focused on short comedies or westerns or other popular genres.

All of which is to say that there weren’t really enough movie palaces yet to handle the major feature releases, so distributors often sold to traditional live theaters, especially in the off-season. A lot of these were being retrofitted to handle film, and many new builders hedged their bets by building combined movie-palaces and stage theaters, with a projection booth for the movies and dressing rooms for the actors. This turned out to be a very congenial arrangement, because audiences could be drawn for either the live show or the feature.

Upscale audiences paid from 25 cents to two dollars for a ticket to a picture show, and they got a lot for that. First, there was the glamour of the movie palace itself, which was often a rococo masterpiece of architecture and décor. After you bought a ticket, you might spend some time in the sumptuous lobby, waiting for a seat to open up. Or there might be lounges – smoking for the men and a powder room for the women. Sometimes these had modern amenities like telephones for their patrons’ use. Finally, you could enter a vast hall with 2000 or more seats, where an usher would help you find your seat in the gloom.

Today, those of us who show up early for a film are subjected to an endless cycle of aggressive advertising, making it impossible to read while you wait for the picture to begin. Back then it would have been too dark to read but who would want to? On the stage there would be vaudeville acts, magicians, clowns, dancing girls, and more. One exhibitor, known as “Roxy” Rothapfel, made a name for himself arranging elaborate productions to precede the movie. Often these would take a key scene from the film, or the theme of the movie in general, and turn it into a song-and-dance number that would make Busby Berkeley swoon (and probably did, in fact). There would also, of course, be pre-feature movies interspersed with the stage show: comedy shorts, newsreels, serial chapters, cartoons, “scenic” or travel movies. The feature might not start until two hours or more after the curtain went up. All of this required musical accompaniment. The organ, which is today probably the instrument most associated with silent movies, was a big investment for a movie palace, but many of them sprung for it. Even more common was a full orchestra pit, with room for anywhere from five to fifty musicians. Some of the best jobs a young musician could find in those days were at movie theaters, and you learned to make fast tempo changes and sudden transitions under the wand of a conductor who had studied the film beforehand. 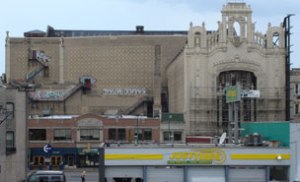 OK, let’s remember that movie palaces were still in their infancy in 1916, so I am getting a bit ahead of the story here (the first Rothapfel-style “prologue” I can find out about was at Grauman’s Million Dollar Theater in 1918, for example). Still, D.W. Griffith’s score for “The Birth of a Nation” required 40 musicians and the pre-show included costumed ushers and actors recreating the atmosphere of the Civil War. Other producers and exhibitors, hoping to copy his success on the expensive features they were now showing, tried similar ballyhoo tactics, and so an audience might never know what to expect.

With all this pageantry, what emphasis was there on the film? Ironically, this seems to have been the most neglected part of the program. Critics and audiences often complained that the movie failed to live up to the expectations built by the theater and the pre-show. To make matter worse, exhibitors often cut the film to make it fit into a pre-determined slot in the program. This is one of the reasons why it can be hard to find complete versions of movies today: They were treated like crap by exhibitors, and studios didn’t make enough backup copies. Sixty copies was considered adequate for a national release. After screening the film, the exhibitor was supposed to splice all the cut scenes back in, but they often had only limited time and resources, and they didn’t necessarily do a very good job By the time the print got to those second- and third-run houses, it could be quite a mess, held together by dubious solvents and with perforations mis-aligned, they sometimes had to cut parts out just to get it through the projector. If a particular reel looked especially dubious, they’d just drop it from the screening. Sometimes they did that to get a shorter running time. After all, they needed to leave time for the pageantry!

Sources: For this article, I have relied heavily on Richard Koszarski, An Evening’s Entertainment: The Age of the Silent Feature Picture, 1915-1928 (Berkeley: University of California Press, 1990) and also drawn some information from the interview with Sir John Barbirolli included on the BBC Legends compact disc of Mahler: Symphony No. 3.