This light gender-based comedy from Alice Guy has an unusual subject: the cravings women get while pregnant. This, and its surprise ending, make it a bit “racy” for early 1900s film, although of course nothing vulgar is really shown.

The film opens on a man in the park with his little daughter, a child of about four or five. She has a lollypop, which she contentedly sucks on while her father reads the paper. A large woman now approaches, with a small bearded man pushing a baby carriage in tow. When she turns to face the child, we see her bulging belly – she is very pregnant, almost ready to drop. She looks at the child and claps her hands together happily. At first, it seems that she is excited over the child’s happiness, but what she really wants is the lollypop. She grabs it and runs, and her husband quickly follows. The child starts screaming, but it takes a moment for her father to react and notice what has happened. Meanwhile, we cut to a close-up of the woman eating the lollypop, a look of rapture on her face. Then, we cut back to long-shot and the father rushes over and remonstrates with the thieving couple. The husband tries to offer him the lollypop back, but he doesn’t want it now that it’s been in the woman’s mouth. He takes out his frustration by hitting the little man, who wags his finger at his wife. They continue until they come across a man in a café drinking absinthe, and, although the husband tries to stop her, the woman steals it while the man isn’t looking. Again, we get a close-up on her rapturous face as she drinks. This time, they sneak away, leaving the empty glass, and the absinthe-drinker seems to assume he drank it all in a daze, and leaves his money for the waiter. Next, they find a homeless man eating a smoked herring. Again, the wife steals it and we see her enjoying it in close-up. This time, the husband pays the hobo for his trouble. Last, they come across a salesman with a tray of something for sale (I couldn’t make out what it was). The wife swipes his pipe and smokes it with gusto, until he takes it back. The couple walk a bit further on until they come to a random cabbage patch. The wife trips and falls in, and she pulls a baby out of one of the cabbages. Suddenly, her belly is gone, and presumably her troublesome cravings as well. 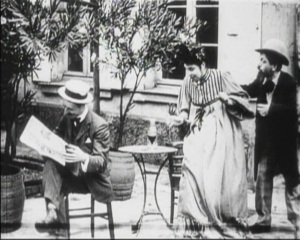 No! Think of the baby!

This is a very silly movie. Modern viewers will probably be shocked to see a pregnant woman smoking and drinking alcohol, but we need to remember that this was pretty common until quite recently, and no one really thought twice about it in my mother’s day (she never smoked, but I’d be surprised if she didn’t at least have some wine when I was in her belly). Anyway, the point here is to get humor out of the strange cravings that pregnant women have, but there’s also a typical humor in the small man being dominated by his larger wife. Guy was a single woman at the time this film was made, and so far as I know had no children, but at age 33 she had surely known some pregnant women in her time, although she was also playing to audience expectations, I’m sure. I loved the fact that she once again used the cabbage patch as her baby resolution – she was really committed to that narrative! So far as the movie’s technical aspects, it is actually one of the more sophisticated narratives I’ve seen from Guy. The use of the close-up to emphasize the emotional state of the woman is surprising – I can’t recall another movie by her that does this, or even if she’s used more than a rare close-up at all. This is also a rare movie in that it uses Intertitles to explain some actions. In “The Birth, the Life, and the Death of Christ” we got Intertitles that set up each scene, but even that was unusual for Guy. Here, we actually see some that interrupt the action to explain it. The editing structure is less surprising, with each shot chronologically aligned with the next, and characters moving from one set to another as exits and entrances.