This is a short chase comedy from Alice Guy, which, not surprisingly, shows a group of people competing in a race with obstacles. There are many visual similarities to “How a French Nobleman Got a Wife through the New York Herald Personal Columns,” one of the best-remembered chase comedies of the time.

The story is told in a series of six shots, each under a minute long. In the first, we see a crowd being instructed by a man on a stage with a top hat. He holds up a poster that says the first prize is 1000 francs, then holds up various consolation prizes for the 2nd place and other winners. These include a bottle of wine, a wedge of cheese, and what I think is a large sausage. The crowd is excited and eager, and several times they look ready to rush off before the man is finished. These are ordinary people in what seem to be peasant clothing, not athletes. Finally, a drummer runs around the front of the crowd, and everyone lines up. The man in the top hat gets out a flag to signal the start, but there are several more false starts before the proper beginning.

The second shot establishes the pattern for the rest of the film. First, a large crowd of “normal” people arrive and overcome an obstacle, followed by two fools or clowns (or bumpkins) who have no idea what to do, and then finally comes a large-ish married couple who spend most of their time fighting. The first “obstacle” is a series of three barrels, which the competitors have to climb through before proceeding. One is so small that only the skinniest people can get through – it is quickly discarded. When the fools come to these, one dives into a barrel and the other rolls it offscreen. The husband and wife seem to be about to do it when they get into a fight about whether the wife is too fat to get through. 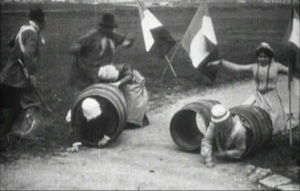 The next obstacle consists of a line of suitcases. Each competitor must open a case and put on all of the clothes he or she finds inside before proceeding. This results in some funny get-ups, including togas, military uniforms, Roman helmets, and men in women’s dresses. When the fools arrive, they wind up trying to put on clothes from the same suitcase, fight over the shirt, and then one runs off carrying the other. The married couple just fights, instead of putting on any clothes. The next obstacle is a low brick wall, which each person has to leap over. It isn’t as much of a challenge, although the fools (now dressed as Pierrot and Harlequin) manage to make it a good tumble. Most of the rest of the crowd seems to be back in their normal clothes. The husband of the married couple gets stuck, and is pushed by the wife, who makes the leap easily. 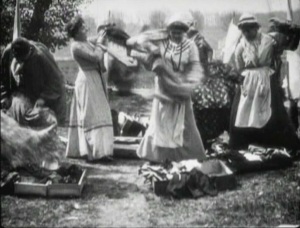 The next obstacle is barely an obstacle – a flock of sheep is in the middle of the racetrack. The crowd runs into them and they part to let everyone pass, which is a nice visual effect, but not a big deal. Finally, we get to the finish line, where the man in the top hat distributes the various prizes. The fools somehow win the bottles of wine, and quickly get drunk. The husband and wife are still fighting, and hit each other with the sausage.

The basic element of a chase comedy is to have a series of long shots which a collection of recognizable characters run through, with certain characters doing comic “bits” as they go. There’s no real need for a story or character development, the situation just needs to give a reason for people to be racing or chasing one another. This movie follows that pattern precisely, focusing on the stragglers for most of the comedy. The “suitcases” obstacle allowed for the funniest visual moments, but there “barrels” were good too. The sheep seem to have just been to get a nice effect. I found the two fools funnier than the fighting couple, but I suppose they are an example of early slapstick.