My final Félix Mayol phonoscène by Alice Guy portrays one of his most popular songs. He sings and dances a bit, working in lip-synch with a prerecorded gramophone record. 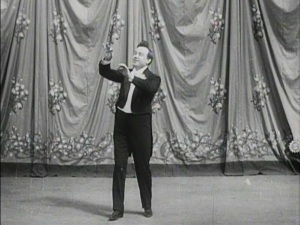 Once again, Mayol enters the stage in long-shot and the camera remains stationary for the length of his song. We get no color or close-ups this time. The curtain is the same: especially sharp-eyed viewers may have noticed that it is adorned with white lilacs, and that Mayol has one in his buttonhole as well. This time, I can spot the Gaumont symbol way down in the lower-right corner. Presumably, it was there for the other movies as well, but the cinematographer failed to get it in the frame.

“White Lilacs” is a love song, told more or less from the woman’s perspective, with a tragic ending (the woman chooses a man who doesn’t love her over one who does). Apparently Mayol suggested the idea to the songwriter, Théodore Botrel, because they were his favorite flower and he wanted it to be his signature song. Apart from phonoscènes, Mayol didn’t have many screen appearances until the advent of “Talkies,” but he did a number of French talking pictures in the 1930s. He would die in October, 1941, in what was then Vichy France, the collaborationist regime with the Nazi occupation force.