This is another of the short sound-on-disc phonoscènes that Alice Guy shot with Félix Mayol. It fits in neatly with the others I’ve looked at this week, but has some distinctions from last night’s entry. 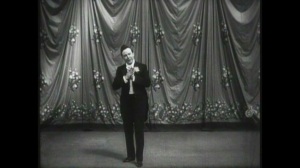 Once again, Mayol walks onto the stage and sings. This time, the image is black and white, and the camera is set back to give us a full-shot of the actor, including some of the studio floor. This latter is probably because, unlike in “Indiscreet Questions,” Mayol does do a bit of a dance here, and needed more room to move around on camera. This was clearly shot in the same session; even the curtain is identical to last night’s film. His hair is also identical – apparently it was part of his act, as caricatured in the poster below:

I thought at first that the “polka” might mean that this song would make fun of Germans, but if these lyrics are correct, it doesn’t seem to be the case. In fact, it seems to be a song about the culture of young boys who hang around railroad stations hoping to pick up tips for helping to cart luggage for tourists. Given that Mayol was apparently gay, and that young boys at railroad stations sometimes make money in less savory fashions, this song may have a certain racy implication as well. As before, Mayol communicates the humor of the song with subtlety, and only suggests, rather than making anything obvious.