With an unusually complex and original storyline, Alice Guy combines comedy with social commentary in this short film. This is a good example of Guy’s particular style: while she borrows the techniques of Georges Méliès, she uses them to present a stylistically distinctive story.

The movie begins at a bar or café, where a magician is winding up his act. He takes down his sign and bids farewell to the bartender, then walks into the street. After an edit, we see him walking along a street towards a corner where an old man in rumpled clothes is begging. He stops and speaks to the man, and after a moment, he appears to decide to give the man something. He puts down his bag of tricks, opens it, and removes a tiny table and chair with an even tinier bottle of wine on it. This, he places in front of the beggar. He makes some magical gestures and suddenly the table is full-sized, with food all over it, as well as a generous bottle of wine. The old man sits at the table and happily begins eating. The magician gestures again and a waiter appears, replenishing the food as necessary. The magician uses his cane to break open the bottle of wine (wasting a lot of it in the process) and pours wine into the old man’s glass. The old man downs the food quickly, then follows it with a glass of wine. When he is done, the magician makes the waiter and table disappear, then transforms the old man into a younger, well-dressed man. He shakes the magician’s hand and walks off.

After another edit, we see the former beggar on a different street. There is a man in shabby clothes with a beard and hat like the magician’s, begging. The newly-wealthy man turns up his nose and refuses to give him anything. Then the new beggar turns into the magician. He gestures and the wealthy man again turns into an old beggar. He pleads with the magician, even getting on his knees, but the magician has taken back his charity, as punishment for the old man’s refusal of charity to another. 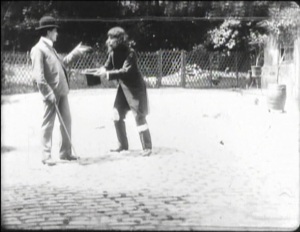 …and the tables turned.

The special effects in this movie are simple stop-camera appearances and disappearances, as Méliès had been doing for years now, but again handled with steadiness and care. Guy doesn’t over-do these effects or put them in for their own sake, she uses them to move the story forward. I particularly liked that this movie was shot on location outdoors, giving us a look at some Paris streets of the period, and the front of what seems to be a rather nice café. Most of her movies are shot on a stage, and since her backdrops are not as artistic as those of Méliès, this is often rather boring to look at. Also, here we have editing to move between scenes, which Guy has done very little of up to now. I found the movie refreshing in visual style and storytelling. In terms of the story, the moral is obvious, but for such an early silent, it’s not overly heavy-handed. The magician gives the beggar what he asks for, beginning with food, and eventually restoring him to wealth, but he does so on condition that the beggar be prepared to “pay it forward” to others in need. When he fails at that, the magician removes his fortune, demonstrating that he is not willing to be taken advantage of, and giving a lesson in unselfishness to the audience.

It’s somewhat curious that the translator chose the antiquated English word “alms” to translate the French “charité.” Alms are usually given in church, although they do support the poor. Usually, in modern English, we would call this “the Magician’s Handout.”