This short film from Alice Guy appears to be another Vaudeville act brought to the screen. This time, the slapstick comedy runs for long enough to give us a clearer sense of the kind of performance audiences were used to seeing live in 1905. 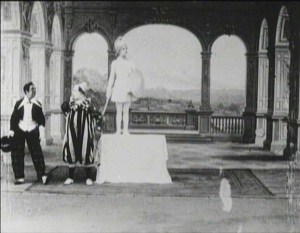 We see a very obvious stage with a backdrop suggesting a museum hall or a large balcony, with a reclining figure on a large altar-like pedestal in front of it. The figure, stationary, is wearing a robe and a helmet, and holds a sword and shield. Two clowns are upstage from it, and appear to be arguing about something. A couple of times, when they turn their backs, the statue moves to a new position. Then, one clown finds a crank on the base of the “statue” and turns it. As he does, the statue begins to dance. The other clown sees this happening, but the crank-turning clown is too involved in looking at the crank to notice. The dancing statue hits him in the head with its sword. Of course, he accuses the other clown, because when he turns to look at the statue, it is stationary (though in a new position). This goes on for a while until the crank-turning clown leaves.

Now the other clown takes an interest in the statue. Is it a living woman, perhaps? He climbs up on the pedestal and touches it, becoming increasingly intimate and laughing over his cleverness. Then, he gets down and turns the crank. Instantly, the statue hits him with the sword and when he runs off to find and accuse the other clown, it climbs down from the pedestal. He comes back in time to see the statue shed its robe and helmet, and drop its shield and leave. Now the clown feels that he must “stand in” for the statue, and struggles to put on the robe and helmet and holds up the shield and a feather duster or something for a sword, and manages to climb up onto the pedestal just as the first clown returns with a camera, wanting to take a picture of himself with the statue. The “statue” is in a very odd pose, looking away from him with the robe unevenly draped over its body, and the camera-clown is not satisfied, so he tries turning the crank. Of course, the clown on the pedestal hits him with his “sword,” and reveals himself. Now the two clowns chase each other around the stage for a while. 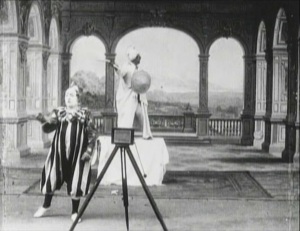 To be perfectly honest, I found this a bit long, even at five minutes, but I think it is a good example of the Vaudeville style of slapstick, and is a much more complete performance than we can see in “Robetta and Doretto” or “The Burglars.” The camera never moves, and the whole stage is visible throughout, meaning that it is hard to make out details of the characters. But that’s why it helps to have them in very divergent clown costumes and a “statue” costume: You never are confused about the three characters. I think the statue is meant to be understood to be a woman (although with the sword, helmet, and shield, it’s hard to say) and so the second clown’s sexual behavior towards her is unchivalrous and vulgar, if not “harassment” as we understand it today. His punishment is to be forced to take her place. I’m tempted to point out that she rejects being placed “on a pedestal” as well. Although it seems to drag a little, there are a few laughs in this piece, and it is a very interesting historical document.