Once again, we have a film by Alice Guy that resembles something I’ve seen before. In this case, however, Guy’s version is earlier than the others I’ve found, so it’s possible it originated with her. 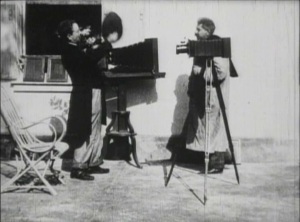 A photographer is setting up his gear to take portraits when a customer comes in, carrying a large plant. The cameraman makes him set it down beside him, then sits him in the chair before the camera. Just as he’s ready to snap the photo, the man leans over and picks up the plant. The photographer tries again, but once again the client moves at the critical moment. This continues until the two men come to blows, smashing the photographer’s equipment.

A very basic form of comedy is to set up an expected action and then suddenly defer or delay it. The angrier or more frustrated the person anticipating the action gets, the more the audience is inclined to laugh to let off tension. Certainly Alice Guy wasn’t the first to discover this, but she does use the basic concept nicely in the short run time of this movie. The other version of this that I’ve seen is “The Photographer’s Mischance” by Georges Méliès, but I believe there are Edison and Biograph variations as well, which just goes to prove what I’ve said before: in the early days of film, filmmakers copies one another shamelessly.