This film is another example of Alice Guy taking an old idea and modifying it to make it a little distinctive. It’s not particularly original, but it was more or less what audiences were expecting in the “Age of Attractions.” 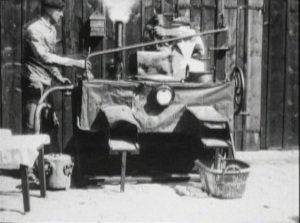 What we see is two men in front of a large machine with two dispensing trays. One man goes off screen and brings various live animals – I saw a chicken, a dog, and what I think were a rabbit and a cat – and he puts them into the machine through an opening at the top. Then he adds some powders (spices? Flour? I’m not certain) and pours water in through a funnel. Then the other man turns the crank while he goes around to the front. The first man removes sausage from the first dispenser, while hats pour out of the second into a basket. He puts the sausage aside and tries on some of the hats.

There’s quite a bit of history behind this movie. In 1895, the Lumière brothers released “The Mechanical Butcher,” which some claim as the “first science fiction film.” In it, a pig is put into one side of a large box and an array of sausages removed from the other. Early filmmakers being quite ready to copy a good idea, this was followed by releases from George Albert Smith (“Making Sausages,” 1897), the Biograph Company (“The Sausage Machine,” 1897), and Edison Studios (“Fun in a Butcher Shop, 1901 and “Dog Factory,” 1904). In that context, Guy was really just keeping up with the Joneses by making a similar film. The “hat” part is, so far as I know, completely original. I can’t help but wonder if all these movies reflect a certain uneasiness on the part of consumers regarding the industrial processes by which food was being produced and their lack of certainty about the quality of ingredients.