This movie apparently took several years to get to the screen and may not exist in complete form today, although at half an hour long, I find it one of the most developed of the movies Gilbert M. “Broncho Billy” Anderson made in his career as a Western star. As with “Broncho Billy’s Sentence,” the story is written to allow Billy to display the full range of human emotions, but the longer run time makes this appear more natural and convincing.

The movie opens on Ruth Saville, who plays Billy’s wife. We are told she is an “Eastern flower” transplanted to an environment that doesn’t agree with her. We see the her framed against the empty rolling hills of Western California, and understand that she needs more company than the wilderness provides. Her old school chum (Rodney Hildebrand) is out for a visit, however. When Billy arrives home to find them talking together, Rodney suggests that he go out and look for gold on his property – he represents an Eastern mining concern that can make him rich. Billy goes out while Rodney continues to pressure Ruth to come back East with him, and he spends days scrabbling at rocks with no success. Finally, he does strike gold and rushes into town to buy finery and things Ruth would like in their shed, but it’s too late – Ruth has left with Rodney. Billy refuses to take revenge, and in a state of deep shock, he sets fire to the shed and all of his possessions. With his house burning in the background, he bids the adulterous couple go on their way – condemning them to each other’s weakness. 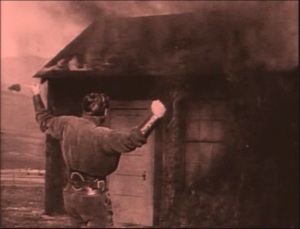 The mine, however, continues to be prosperous, and with nothing else in his life, Billy proceeds to get rich on it. In the meantime, Rodney has set Ruth up in the city as his mistress – he has a wife already and never had any intention of giving her anything but money for her affection. With nowhere else to turn, Ruth accepts it, but she’s no happier here than she was in the West. Billy is now living with servants and a mansion – but he still allows his dog to jump up on the desk. As a new wealthy man in town he is invited to a dinner party with other men of wealth. Of course, when he arrives, the house turns out to be Rodney’s, and he refuses to dine with a lowdown snake. Rodney tries to save face with his chums by bragging about stealing Billy’s girl, which sets him off: “if you ever speak disrespectfully of her or any harm comes to her – I’ll finish you with my naked hands!” Ruth as we know is suffering from her mistake, and she finally decides to kill herself, first writing a note asking Billy to come to her. She ends up in the hospital, and Billy does come, arriving in time to be the last thing she sees on Earth. They play a touching scene at her deathbed, surrounded by doctors and nurses, and of course Billy forgives her. She dies as he kisses her.

Now Billy is overcome with the desire for revenge, and to make his threat come true. He goes at once to the home of Rodney, where a butler in terrible blackface lets him in and shows him to his master. Billy and Rodney fight, Rodney tries to get a gun, then tries to run, and finally starts throwing anything he can get his hands on to try to stop Billy, smashing up his own house in the process. The fight is prolonged, and intercut with Rodney’s wife and butler trying to break down the door to get in, finally, they do and a tiny child runs in as Billy closes his hands on the throat of his nemesis: “Please don’t hurt my daddy.” Billy suddenly becomes aware of what he is doing and backs off in horror, while the family tries to revive Rodney. Billy collects his hat and coat and leaves them in the shambles of the living room. 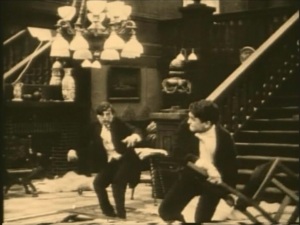 Again, I think it is Anderson’s acting that carries this movie, although compared with the shorts I’ve reviewed up to now, it is well-shot and edited, and we do get somewhat more interesting performances from the supporting cast, especially Rodney Hildebrand. I also liked how the visuals contrasted the openness of the West with the closed and sometimes claustrophobic spaces of the East. While the West is empty and spacious, the “city” is crowded with things and people. There are minimal close-ups, so Anderson must show his feelings in a big way that sometimes seems to overwhelm the moment. When he backs off from fighting Rodney at the end, for example, his stunned look and frozen body language seems to drag out the situation rather than resolve it, although we do understand how horrified he is by his own actions. That fight includes probably the best stunts I’ve seen in any Broncho Billy movie, perhaps he’d taken advantage of over a year of having Charlie Chaplin as an employee to pick up a few tricks. In some ways, this was probably the masterpiece of his career, and it does deserve a look by any fan of silent Westerns. On the other hand, I wouldn’t put it in the same category with the best work being done by DeMille, Chaplin, and others in Hollywood by this time, and it may be that Broncho Billy’s day ended about when it needed to so that others could advance the art past his level.

I have not found this movie on the Internet for free. If you can, please comment below.