This short film from Alice Guy‘s first year working at Gaumont makes a nice follow-up to yesterday’s film. Indeed, I wouldn’t be surprised if they had been shot on the same day, or even within a few minutes of one another.

This time, we see a group of boys in striped swimming trunks, climbing on some rocks in a stream. There is a dog with them, and all of them, human and cainine, seem happy for the cool water, suggesting a very hot day and a respite for the bathers. The boys splash each other, scamper over the rocks, and occasionally tug their suits back into place. 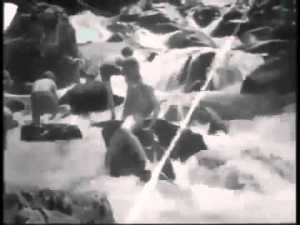 The swimsuits, again, seem very revealing for the nineteenth century, and one wonders if women would ordinarily be able to see such a spectacle. In that sense, Alice may be showing us a rare un-fettered example of the “female gaze” at male semi-nudity. There is an older man in the background, also in trunks, and he may have been the victim of these boys in “The Fisherman at the Stream.” If so, Alice has at least thought to re-position her camera, in order to make it less obvious that these are the same streams, which is more than Edison’s filmmaker’s thought to do when making fake newsreels of the Spanish-American War a year later. What the movie reminds me of the most, however, is the Lumière film “La Mer” which I reviewed last summer. It shows the innocence of childhood play, and also the freedom of summertime, just as that movie does, but in a different way.