This is another early French experiment in sound cinema, this time using their stirring national anthem as the subject matter. Evidently, problems with amplification of the soundtrack prevented this method, developed by Georges Mendel, from catching on, but it remains a fascinating example of the struggle to add a second sense to the silver screen.

There’s really no plot to this movie, what we see is a cannon with a French flag leaning against it and a painted set in the rear. Opera singer Jean Noté walks out onto the set and stirringly sings “La Marseillaise” – well, not really. In fact, the film was shot with him lip-synching to his pre-recorded phonograph record of the song, and he simply moves for the camera while the song plays. Noté gestures emphatically throughout the performance and ends with a patriotic salute. Fans of the 1938 French film or even the scene from Casablanca will not fail to be moved. 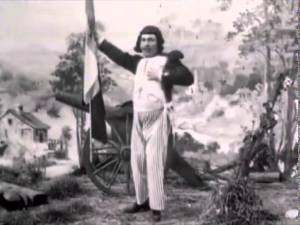 Unlike in “Cyrano de Bergerac,” inventor Georges Mendel had worked out a mechanism for synching the phonograph playback to the projector, taking the pressure for synchronization off the hands of the projectionist. For me, the effect of the movie is greater as well, because I don’t need to understand French to enjoy the music. It’s interesting to think about the position of France in the world at this time, before being laid low by the First World War, with a still-flourishing global empire that largely was not in rebellion. By the same token, at this time the French cinema dominated the world (somewhat more than two-thirds of the films shown in American nickelodeons were of French origin at this time), and had not yet begun its decline in importance. It therefore makes sense that experiments in sound would be made in film’s first nation, and that they should be as proudly nationalist as this offering.