This typical Keystone “park comedy” with Mabel Normand and Roscoe “Fatty” Arbuckle adds to its visual interest by including a variety of amusement park attractions, and uses many of the best players in a cast that never lets up on zaniness. 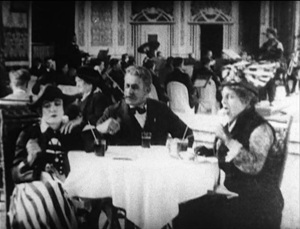 It begins with Mabel out with her parents, obviously not having a good time. She sits at a table in a large dining hall with music that she mimes to us is too loud. Her father (Glen Cavender) seems to enjoy it, but her mother (Alice Davenport) is enjoying onions for lunch, making the other two hold their noses. Mabel runs away from the table at the first opportunity. Meanwhile, Fatty and his friend Edgar Kennedy have shown up and are following any unattatched young woman until Joe Bordeaux, the cop, takes an interest in them. Fatty relives some of his routine with a water fountain as seen in “Fatty’s Chance Acquaintance” and then sprays Joe in the face. After they get away, they see Mabel trying to scam some sweets off a ice cream man (Bobby Dunn), and fight over the opportunity to be her savior. Fatty wins, then steals a large coin from the cash register to pay. He and Mabel feed most of their ice cream cones to a bear in the zoo (very bad behavior, nowadays), and Fatty even manages to feed it some peanuts from his mouth! Meanwhile, Edgar Kennedy has stumbled across a baseball throwing game, with a man in very obvious (and offensive) blackface as the target. He starts throwing balls with all his might when Glen wanders up, now on the hunt for his daughter. This turns into a chase, then a battle between the two men with their canes. Edgar runs off to the merry-go-round and the chase escalates and Glen tries to catch up to his fast-moving horse, but winds up getting kicked in the pants every time Edgar comes around. Edgar makes his escape by leaping off and leaving the old man pursuing the empty horse. 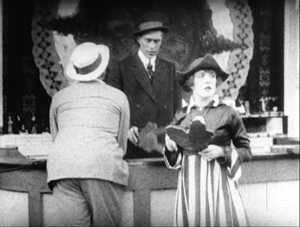 Fatty and Mabel are now enjoying a giant slide with mats. They are knocked down by, or knock down, several other riders, including our old friend Joe the cop. This leads to a fight in which Mabel leaves Fatty and runs to Edgar, resting on a bench. They go off to play another amusement park game, while Alice takes a rest at another nearby bench, putting her umbrella up against the sun. Fatty picks some flowers, and mistakes her for Mabel (this would have made a lot more sense if they had been wearing the same dress, but oh well) and tries to kiss her. She, outraged, leaps up and starts flailing with her umbrella. Now Mabel sees her father and tries to introduce him to Edgar, which predictably does not go well, after their fight, which now breaks out anew. Fatty dusts the old man off and sympathizes with him, earning a new “introduction” to his daughter, and of course Mabel’s mom walks up and recognizes him, leading to more violence. After Fatty is chased off, he and Edgar swear off women before being chased by Joe the cop, and Mabel’s parents turn her over for a spanking. 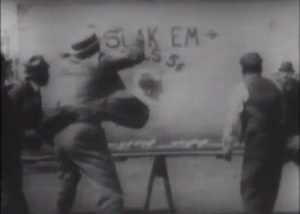 This is another movie whose direction seems to be attributed to either Mabel, Mack, or Roscoe, depending on who you ask. My go-to authority, “The Silent Era” weighs in on Arbuckle’s side, and it’s probably right, but I do have a theory that might explain the confusion. Unlike a lot of the other “park comedies” from Keystone I’ve reviewed, this one obviously took place in a location away from the Sennett studios, and it may have been a spontaneous decision to grab some actors and cameras and go there, without even a script. In that situation, and with different actors performing in groups in different parts of the park, the duties might have been split, depending on who was available at the moment. The ending strikes me as something that was dreamed up on the spot, not a planned resolution. About that ending: I suppose that the spanking of a grown woman (Mabel would have been 22 at the time) is another example of “vulgarity” in early slapstick – certainly it would have its titillating side for some members of the audience. It’s still surprising enough to get a laugh out of me, although really all Mabel did wrong was to get bored hanging out with her parents.