This animated cartoon was included in the same DVD collection that gave me “Charlie on the Windmill,” so the same caveats apply, except that in this case I’m not certain that the title wasn’t invented for the DVD release, which only makes it harder to research. We do get an almost-complete story this time, unfortunately with typically dehumanized cartoon Native Americans as the foes. 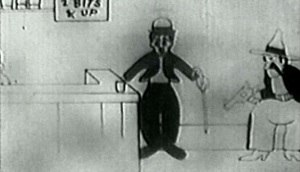 Here, the animated version of the “Little Tramp” rides into a Western town on the back of a horse. he stops in at the bar and orders a drink, but the liquid bounces from his glass into that of a grizzled fellow-patron. This fellow warns him that the locals don’t like strangers and points a gun at his feet. Charlie runs for it, leaping on his horse and riding from town. At the edge of town, he hears a mother weeping and stops to ask what is wrong. She tells him her beautiful daughter has been stolen by Indians, and Charlie offers to save her. He scouts the Indian village from a distance and loads his gun with some odd large substance. When he fires, a large square thing comes out and knocks three Indians over the cliff at once (no, I don’t get this either). Then, he is suddenly being pursued by a bear (this is where I think there’s missing footage) and climbs a tree to escape. The bear bites through the tree, felling it, but it lands bridge-like, spanning the chasm between two cliffs. Charlie faces the bear in the middle, using his cane and some fancy footwork to get to the other side. Now the bear chases him into a couple of tree trunks: the first is full of skunks, and the second turns into an unseen battle ground. The bear emerges, seemingly unhurt, but moves oddly, then takes off its head and reveals Charlie inside its skin. The Charlie-bear approaches a tree with a beehive and an Indian brave sees him and shoots the beehive, causing the bees to attack Charlie. Then he shoots an arrow into Charlie-bear’s butt. Charlie pulls it out and throws it back, hitting the Indian’s butt. Now another (female?) bear sees Charlie and pursues him. He hides in a cave and there is another unseen battle. Charlie runs out, back in his usual getup, and the bear looks out of the cave, holding the other bear’s boneless head like a mask. Charlie leaps on his horse and goes to the hills above the village, using his rope to lasso the bound and gagged woman in front of the fire. He then races back to the mother, who offers him his daughter’s hand in marriage. She removes the gag and reveals a silly-looking face, and Charlie spurs his horse and rides off into the distance. 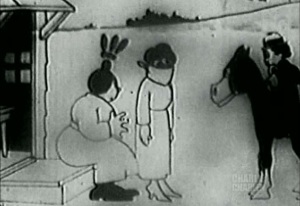 With this much material to work from, it’s easy to see parallels, both with the later Felix the Cat cartoons that this team would create, and with the work of Winsor McCay, who influenced them both as well. The backgrounds tend to be undetailed, and white space fills much of the screen. I noticed less of Chaplin’s physical style in this than in “Windmill,” and a lot more of the imaginative whimsy of Felix cartoons. Although I didn’t understand how Charlie used his gun, it reminded me a lot of Felix’s magic bag. Inanimate objects will do impossible things, and animals seem to be at least as smart as the people. Unfortunate (but unsurprising) was the depiction of the Native American kidnappers. All of them seem to be identical mohawked warriors, and they show little personality (except for the mischievous one that aggravates the bees) or motivation.

I have not found this available on the Internet for free. If you do, please comment below.