Whereas cinematography refers to the straight use of the camera to create an image, many images are created through the use of other devices, or by using a camera in ways not necessarily intended by its originators. The story goes that Georges Méliès “invented” visual effects by accident. He was on the street, filming traffic as it passed when the film jammed. He continued shooting after clearing the jam. When he played back the footage, a bus had turned into a hearse, and a man into a woman, because of the elapsed time between the shots. Whether this is exactly true or not, filmmakers have been using cameras ever since to distort time and reality.

By 1915, visual effects had become part and parcel of many films, and were used to display either supernatural, psychological, or spectacular events. In “Regeneration,” filmmaker Raoul Walsh gave us a tremendous ferry fire, tinted with color to emphasize the drama. Similarly, John H. Collins, working at the under-rated Edison Studios, re-created the Triangle Shirtwaist fire as a plot element in his “Children of Eve.” Wladislaw Starevich made the entire First World War into an allegory with animals fighting through stop-motion animation in “Lily of Belgium.” In “Hypocrites,” director Lois Weber showed the “Naked Truth” as a transparent nude woman. Finally, the Russian filmmaker Evgeni Bauer creates a Gothic psychological drama through the effects in “After Death.”

The nominees for Best Visual Effects (includes animation) of 1915 are…

And the winner is…”Lily of Belgium!” 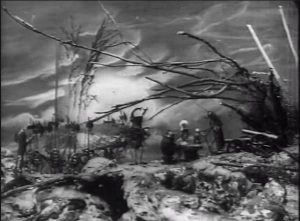 While it’s a pretty predictable propaganda movie, this war of beetles against frogs and pine cones holds up today as a technical achievement of early classical silent cinema. The bad guy beetles are especially individualized and interesting, with beer steins, cars, and cannon designed for their use. And, as strange as it is to see pine cones are warriors, they make fascinating characters as well. Starevich once again established his supremacy at visual effects in 1915.