This one-reel comedy from Keystone is basically a riff on the classic “elopement” plotline of “Leading Lizzie Astray” and especially “Fatty and Mabel’s Simple Life,” but with the addition of an escape by airplane to add to the excitement. Roscoe “Fatty” Arbuckle directed and stars in this tribute to chaos and high-speed vehicle chases. 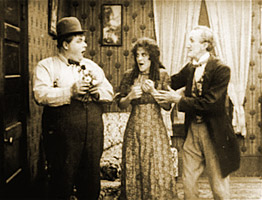 The story begins in a kitchen, with Minta Durfee and Joe Bordeaux working together and Joe occasionally hitting her father (Frank Hayes) by accident. Minta has an odd Mary Pickford-like wig on that doesn’t quite seem to fit. Finally, Joe works up the courage to ask for her hand in marriage. Frank and Minta both seem pretty surprised, but happy, and Frank finally shakes his hand. Now we cut to the outside and see Fatty approaching the house with flowers in his hand. He knocks on the door and thrusts the flowers into Frank’s face when he answers. Frank seems annoyed by Fatty, but when Fatty asks him to marry Minta, he seems to think it’s better than having Joe for a son-in-law. He hustles Minta into the room to see if she will warm to the idea. They seem to be getting along, but Joe now comes out to investigate. He and Fatty exchange blows until Frank intervenes and kicks Joe back into the kitchen, locking him in. Joe sits on the hot stove and runs over to the sink, where he pours a cup of water down his pants. Finally, Al St. John arrives with a note from his father asking for Minta’s hand as well. Frank seems to like this idea best of all, and shakes his hand, then pulls Minta over to him against both her protestations and Fatty’s. He repeats the trick of kicking Fatty into the kitchen and locking it, although Fatty is decidedly harder to manhandle. 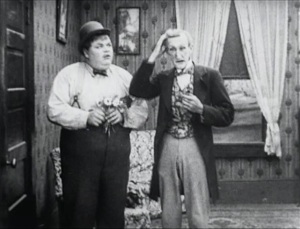 Meanwhile, in the living room, things aren’t going that well, and Minta kicks Al into the dining room with father, where he begins to bawl like a baby. Frank goes into the living room to give his daughter what for (and a brief spanking) before bringing her to Al. Now Fatty and Joe make their escape – Fatty grabs Minta and drags her through the kitchen to the back door while Joe locks Frank and Al in the dining room. Minta screams and flails her arms, but actually seems to be having a good time. Fatty brings her out back to an automobile, and Joe catches up. Fatty leaves Minta with Joe while he goes back inside to leave a note for Frank, who is still trying to break out of the dining room. Joe of course, pushes Minta into the car, but she leaps out. Fatty slips his note under the dining room door and emerges to see her running over a field with Joe in pursuit. At last, it occurs to Frank to call the Keystone Cops, since there’s a phone in the room he’s locked in, and they roar out of a police station in all their Keystone glory. Fatty catches up to Joe and a fight breaks out, which Mint watches with pleasure as Fatty beats up Joe and throws bricks after him. Now Fatty sees the airplane on the field, and their escape seems assured. Al and Frank rush out of the house in time to see them take off, and they climb into the automobile. Joe is stuck with a bicycle, but gives chase anyway. The chase now involves four vehicles, but Fatty focuses his trick flying on the Keystone Cops (who are firing guns into the air and might hit him, I suppose). He drops what seem to be coconuts on them and runs them into a field, where they break down, Fatty managing to do a couple of loop-de-loops for good measure. Finally, he lands at a preacher’s and the wedding seems all set to go – but there’s something wrong with Minta’s wig – it comes off while they’re waiting for the preacher to respond to their knocks and Fatty sees that she’s bald! Al and Frank rush up and Fatty shakes their hands and runs out the door. Now Al notices what’s wrong and runs out to join Fatty. When Joe rides up on his bicycle they congratulate him and leave, and he gets his wish after all – sort of. 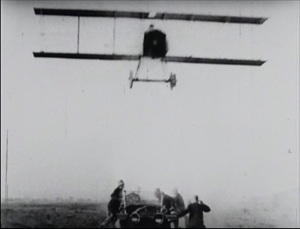 I’ve described the action in considerable detail, although it would be easy enough to summarize in a couple of sentences, to give an idea of the sense of shifting allegiances, fickleness, and goofy motivations of the characters that go into creating a single climactic chase sequence and an excuse to show off biplane stunts. I’m sure Arbucke was not the actual pilot – all the trick shots are at such a distance that you can’t see the passengers on the plane. But “barnstorming” was coming in as a new fad, and the movies probably seemed like a great way to exploit it. I don’t think it worked all that well – a lot of the shots are at such a distance that the plane is tiny and seems to move slowly, and there are no action shots taken from inside the plane, which would have livened it up considerably.

In spite of a disappointing chase scene, the rest of the movie is actually quite funny. One thing I thought about while watching this one is that if you judged by Keystone movies, most Americans in 1915 left their front door unlocked, but had locks on nearly all their internal doors that could wind up trapping occupants during a fire or other emergency. I’m sure that’s an example of Keystone reality, however. I was also quite relieved at the end when Minta’s ugly Pickford wig turned out to be a deliberate gag – she looked terrible with that thing!