In another of Keystone’s “park comedies” Roscoe “Fatty” Arbuckle again finds new ways to make us laugh at old material. In this case, he’s recycling a lot from “Mabel and Fatty’s Wash Day” with a new cast, and some new ideas. 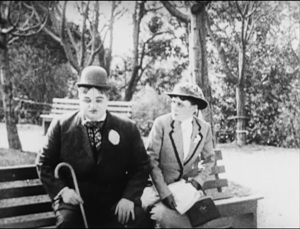 Fatty is married to Billy Bennett, a shrewish woman who I thought might be cast as his mother. She makes him sit on a park bench and do nothing while she reads from a magazine. When Fatty tries to buy a soda, she denies him the change, telling him to drink from the water fountain to save money. This initiates one of the funniest sequences, in which fatty is repeatedly sprayed in the face by the unpredictable water fountain, but fails to get much of a drink, until he fills his hat and drinks of of that. Meanwhile, pickpocket Harry McCoy is out with his best girl (Minta Durfee, who was married to Arbuckle in real life) in the same park. She’s hungry, but he’s too cheap to buy anything.

McCoy meets Billy about the same time that Fatty runs into Minta, and each has plans of his/her own. McCoy steals the money from Bennett’s purse, and Durfee talks Arbuckle into taking her to a nearby café. Unfortunately, cop Frank Hayes has watched McCoy in action, and tries to arrest him, leading to a madcap chase. Fatty goes back to Bennett, and, finding her asleep, takes the purse to use for money to feed Minta (of course, we know there’s no money in it). McCoy is able to swipe a couple of sodas off the soda man and use an ice cream cone to divert the cop, but now he can’t find Minta. Meanwhile, Bennett wakes up and accuses an innocent woman of stealing her purse, leading to more slapstick silliness with her and her boyfriend (Glen Cavender). Minta does at least get part of an ice cream cone out of Fatty before he smooshes it, but then Fatty can’t find any money to pay the waiter. The waiter insists on keeping Minta “for security” while he goes to look for money. He borrows a dollar from McCoy, who doesn’t realize it’s Minta he’s “pawning,” but when he sees it, he comes over and starts a fight. That’s about when Bennett wanders up as well, trying to figure out who took her money. She finds the purse, and then Fatty with Minta, and things get predictably chaotic from there.

The funniest parts of this movie, actually, are the bit roles of Frank Hayes and Glen Cavender (who is noticeably afraid of Bennett), and the bit with Fatty and the water fountain. A lot of the rest of it is pretty similar to other movies from this series. Interestingly, Minta and Fatty seem to have less chemistry together than Fatty and Mabel Normand. You always sort of feel that they belong together, even when they’re married to other people, but Minta seems to be only interested in using Fatty, and Fatty just seems to think she’s an improvement on Bennett, not a serious romantic interest. They did divorce, eventually, so this could have been a bad moment in their relationship, or just a less successful performance for other reasons.

You can watch it for free: here (no music, Dutch Intertitles) or here (with music).