Keystone’s classic comedy couple star again in this one reel story of evil gypsies and mistaken identities. The Keystone Cops put in a good appearance and we also get some great street footage of old Los Angeles. 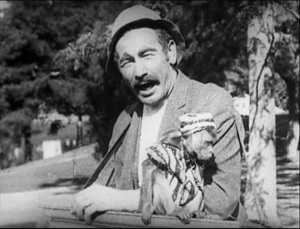 The movie begins with an Intertitle that tells us “she reads exciting books,” which I think is meant to signal us that Mabel Normand’s character is given to fantasy and over-excitement. She and Roscoe “Fatty” Arbuckle are sitting together in the park reading when an organ grinder’s monkey suddenly attacks her. Fatty fights it off, but this offends the organ grinder, who comes over to challenge him. Fatty easily overcomes him with superior strength, even going to far as to toss his organ after him, but the man vows revenge, leading Mabel to imagine that they are under a gypsy curse. Fatty walks Mabel home, where he meets a business associate (Charles Lakin) with whom he has an appointment. He sends Mabel into the house and starts to leave with Charles, but then realizes he has forgotten important papers. He brings Charles into the house to look for them, but Mabel is already upstairs reading in the newspaper about daylight robberies in the area. She gets out her gun when she hears someone going through the drawers and fires it through the door, hitting Fatty in the rear. Fatty runs and hides in a wardrobe, and his colleague runs back out to the car in a panic. Mabel finally discovers who she’s been shooting at and Fatty throws the gun away. Then he goes off with his associate to an office and leaves her alone. Mabel locks the door.

Now the organ grinder from before is outside with a friend of his. Mabel sees them from the upstairs window, but decides she is safe inside. Then the curtain in the room moves by itself. She tries to convince herself she’s imagining it, but the curtain keeps moving every minute or so. Finally, she grabs the phone and calls the police, reporting an intruder in her house. Fatty and the other fellow see the cops racing toward his house from downtown, in a classic Keystone crowded cop car. Meanwhile, the organ grinder has come up to the door and knocked. Mabel starts to open it, thinking it’s the police already, but when she sees his face, she tries to slam the door. The organ grinder forces his way in and she flees, throwing things at him as she retreats. Finally, she locks herself in the upper section of the house, but the curtain in the back room is still moving ominously. Now, the police arrive and a crowd of neighbors gathers to see what’s going on. The police work on crowd control and a few, led by Al St. John, enter the house to investigate. They find the organ grinder and hold him. Al assures Mabel everything is all right and she opens up to him, then leads him to the room with the moving curtain. Al tries to investigate, but every time the curtain moves, he jumps back. Finally, the organ grinder breaks free and rushes to the curtain, where the culprit is revealed: his little monkey, of course! Fatty comes home and is held back by the police as he tries to find out what’s going on. The police release the gypsy and Mabel and Fatty are reunited. 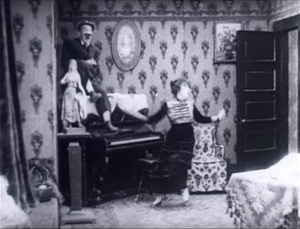 While it was pretty predictable, this movie was a good example of the work that Keystone was putting out after Charlie Chaplin left in 1914. I particularly enjoyed Al St. John’s cowardly cop act, his gangly legs shaking as he approaches the curtain, then jumping back a bit further each time it moves. Fatty does seem a bit more prone to violence than usual, taking out a good deal of wrath on the organ grinder, who is after all only concerned about his little monkey. But the chemistry between the leads is still strong, and we see all the established techniques of slapstick put to good use here, including a sequence of rooms that are integrated and yet cut off from one another to allow for greater confusion.