Again, this is a Lumière remake of one of their best-known films. As with “Leaving the Factory” there is more than enough information to make it clear that this is not a simply “re-take” done at the same time as the better-known “Train Coming into a Station,” but it also isn’t meant to be an entirely different film. 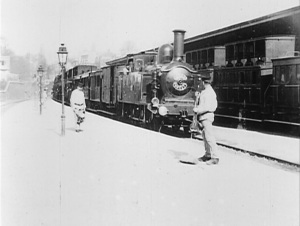 Here, the camera is set quite far back on the platform, and the train travels across the screen at an angle away from it, toward the right corner. We only see a few seconds of the train in motion before the doors open and people flood out onto the platform. The crowd passes by the camera, and we see rows of people as they go by, making this similar to watch to “Leaving the Factory,” which also shows crowds of people as they pass. The people we see are mostly men, mostly middle-aged, and mostly well-dressed. As in “Leaving the Factory,” everyone wears a hat. Many of the men have mustaches, some have beards, and only a few younger men are clean-shaven. The women are consistently above forty five, while the men’s ages vary greatly. From the way people are dressed, it appears that this is winter – we see many overcoats and furs. Again, many people look at the camera, although no one stops to stare at it (they’d probably get knocked over by the crowd behind!). 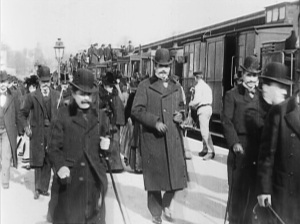 There is a well-known story that when the original “Arrival” was screened, people panicked, fainted, or ran away from the screen, fearful of being crushed by the moving train. It is tempting to suggest that this is the reason why the Lumières remade it with the camera at a more discreet distance, but unfortunately the current consensus is that this story is a myth. It’s still conceivable that they were trying for a less “dramatic” effect by moving the camera and emphasizing the crowd, rather than the train itself. Or, it could be that they couldn’t get permission to use the close position because this station was so much busier than La Ciotat, where the first one was filmed, and they needed to keep back from the crowd of passengers departing. At any rate, the two films make an interesting contrast and show the difference that can be achieved through a very small change in camera angle.