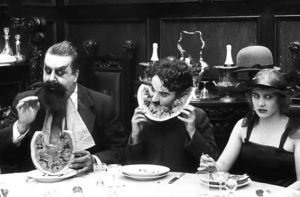 Charlie Chaplin continues his run of Mutual shorts with this simple piece that harks back to “A Jitney Elopement” and other romantic comedies of the slapstick variety. He gets some wonderful bits of business into the spare plotline.

At the beginning of the movie, Charlie is working as a tailor’s apprentice, taking the measurements of a lady customer. His measurements are confused by the lady’s failure to stand straight, by the tape measure getting caught on a dummy, and by his own imprecise units. The tailor (Eric Campbell) notices what he is doing and comes over to take charge. Charlie, not sure what to do, tries some ironing, only to burn holes in several pairs of pants. When the tailor finishes with the customer, he comes over and fires him. Charlie asks for his pay, but the tailor forcibly ejects him. After he’s gone, the tailor discovers a letter from Count Broko (Leo White) in one of the ruined pants, declining an invitation to meet the eligible Miss Moneybags (Edna Purviance) at a party. This gives the tailor the idea to dress up as the Count and make a good match.

Meanwhile, Charlie has gone to the servants’ entrance of a mansion, looking for handouts. The friendly and flirtatious cook offers him a sandwich with smelly cheese, which is the occasion for some humorous bits as Charlie tries to figure out what the smell is. Then the butler shows up for his lunch. Charlie hides in a basket, but the cook throws the cheese in after him, so he keeps throwing it out. The butler leaves when the doorbell rings, but Charlie’s escape is prevented by an amorous policeman, also interested in the cook, so he dives into the dumbwaiter and goes upstairs, where he runs into the tailor, disguised as Count Broko. Charlie could give the game away, so the tailor offers to bring him in on the scam as his secretary. Then, when the butler arrives to announce the Count, Charlie claims to be him and announces the tailor as his secretary. They go to dinner, Charlie on Edna’s arm and Eric on her mother’s. The dinner includes such classic bits as Charlie stopping Eric’s noisy soup slurping in order to converse with Edna and some hilarious watermelon-eating. After dinner, Charlie and Eric compete for Edna’s attention, with Charlie generally getting the upper hand by tricking Eric. Charlie’s one problem is that he keeps running into the jealous cook, and he is briefly distracted by a woman in a revealing gypsy costume. Then, the real Count Broko arrives, and real mayhem breaks out, with a full-on Keystone-style chase ensuing. Charlie escapes, Eric is arrested, and the Count is covered in clam dip. 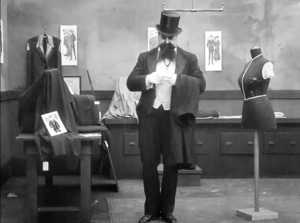 This movie once again takes advantage of the comedy trope that penniless aristocrats were always seeking the daughters of nouveau-riche families and vice-versa. This has come up more than a few times now in the Chaplin oeuvre. Chaplin initiates much of the violence and pranks in this movie, but he seems justified because of his previous ill-treatment by the tailor. He doesn’t wind up getting the girl, but he doesn’t seem to be genuinely interested in her, either, just in keeping her away from Eric Campbell. Whether this is out of revenge or in her interests is hard to say. I liked the food business especially in this movie: the smelly cheese, the watermelon, and even some of the after-dinner aperitifs were integrated into the humor. The cheese bit once again shows how silent films used visual cues to include the audience’s other senses, something we saw done with sound in “The Vagabond.”

You can watch it for free: here (no music) and here (with music).