Oliver Hardy is often associated only with his sound-era performances with Stanley Laurel, but he had a long silent solo career behind him. This movie, according to the “Slapstick Encyclopedia,” was his 95th film, but it’s the first one I’ve had a chance to review. It shows his talent, but has a number of weaknesses compared to the best of the other comedies I’ve looked at. 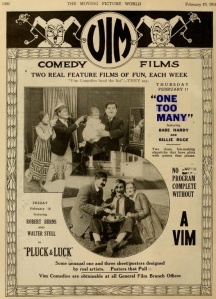 Ollie is “Plump,” a character often teamed with “Runt” (Billy Ruge), as in this film. The movie begins with a play on its title – Ollie appears to be hungover from over-indulgence from the night before. That’s not the point of the movie, however, this is a bit of comic misdirection. After a few moments of disorientation, Ollie discovers the real plot. He receives a telegram from his rich uncle (probably the one financing his indulgences) that he is coming to visit and looks forward to meeting his wife and baby. Bachelor Ollie is in trouble now, the jig could be up! He rushes across the hall of the boarding house to his (female) neighbor and announces “I need a wife and a baby right away!” Then he runs back to his flat. He summons Runt and pays him $50 (roughly the purchasing power of $1100 today!) to find him some stand-ins. Now the real meaning of the title becomes clear as Runt does his job a little too well, bringing in women and babies by the wagonload. Meanwhile, a prankster neighbor is sneaking in to the apartment and removing them whenever Ollie’s not looking! When the uncle arrives, the house is empty and Runt has to quickly dress up as a baby himself. The uncle is charmed…at first. Things get ever more ridiculous and chaotic up to the end, with women coming and going in their role as “wives” and various men looking for their babies complicate the story Ollie wants to tell. 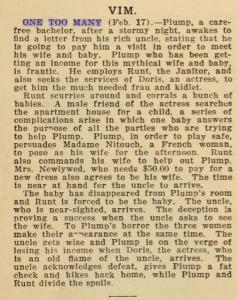 I was surprised at the amount of wordplay and the large number of Intertitles in this movie. I’ve already mentioned the play of the title itself, and there are several jokes about Runt as a baby, the women who have agreed to be “wives” and the neighbors’ activities during the course of the film. There’s also a running gag about Runt having to haul a large box up the staircase (the elevator is out of order) and a cranky neighbor (Billy Bletcher) who wants to get past. In short, there’s a lot going on in this one-reel movie, and sometimes things get lost in all the chaos. I think Oliver Hardy holds up pretty well, but a lot of the other comics (including Runt) don’t have that much going for them. The camerawork and editing is quite unimaginative for the time, and the surviving print is in less-than-perfect shape. It’s less a genius work of slapstick, and more a representative sample of an “average” work with a few good points.