Race is a consistently problematic issue with this project, especially for movies which depict African Americans for mostly white audiences. Here, we get a black actor who may have had black audiences in mind during his performance, but who was working for a decidedly white company in doing so. The result is more than a little uncomfortable, although still successfully funny at times. 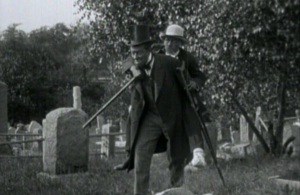 Bert Williams (who plays a character named Bert Williams) is a member of Independent Order of Calcimine Artists of America, a fraternal order which meets in a saloon. He is forced to pay up his dues in order to stay for the gambling which follows the meeting. After the meeting and much argument, Bert carries home his right hand man “Limpy” Jones, because Limpy has a broken leg. As they walk through a graveyard en route from the saloon, they overhear two thieves whom they suspect to be the devil when they hear them speaking. This puts them in a panic and Bert drops Limpy in order to run away. Limpy gets up and runs, quickly overtaking Bert, and showing that his leg was not really broken after all. Bert runs into the thieves outside the graveyard, and is not frightened, since they are normal-looking men. They become friendly and Bert invites them back to the saloon, where Limpy has already run to. Bert joins another dice game, and the thieves lose the chickens they had stolen.

Meanwhile, Brother Scott of the Order is on a crusade against gambling. He has written an article for the paper claiming that the “evil” is all but gone from town. He breaks up the dice game and takes the money left behind. Another card game gets going when a rich gambler from the North arrives, and Bert and Limpy cheat to take his winnings. The lookout warns the gamblers that “the town sleuth” (a white man) is coming, and they clean up the place and Bert reads Brother Scott’s article against gambling aloud to make it look good. Unfortunately, the cop spots a stray card on the floor. The game resumes when he leaves. Suddenly, the sleuth returns with the police and since the lookout fails to give warning, everyone is arrested. The action now shifts to a courtroom, where the judge gives Brother Scott the winnings from the gambling as a lawyer’s fee, and sentences Bert to ten days in jail. Inside his jail cell, Bert is overcome by his gambling fever and fantasizes about being in a card game, showing through pantomime that he is living a game that isn’t really happening.

The “Slapstick Encyclopedia” presents this movie with a quote from Bert Williams: “It is no disgrace to be a Negro, but it is very inconvenient.” Similarly, this film is not an insult to Williams and his talent as a comedian, but it remains hard to watch in some ways. The African Americans in the film are lazy, shiftless, dishonest, stupid, superstitious, childish, and especially addicted to gambling. Williams himself wears blackface, to emphasize his African American features for the audience, a trick he picked up in the mostly white world of Vaudeville and the Ziegfeld follies, where he was the first black performer. Still, this is the first movie I’ve seen from this period with an African American star, and his name was heavily used to promote the movie. Williams, performing within the constraints of the situation, shows himself to be a talented comedian with excellent timing and an emphasis on comedic pantomime over slapstick. It is easy to see why he was such a success – a combination of talent and a willingness not to rock the boat of racial inequity too hard. W.C. Fields evidently referred to Williams as both “the funniest man” and “the saddest man” he ever knew, and that sums up a lot of what can said about the history of African American comedy. 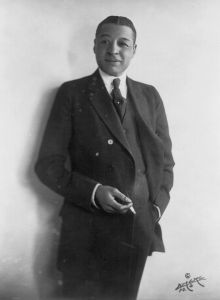 Bert Williams out of makeup.

The production is interesting in some other ways as well. It was produced at Biograph Studios, which had been crippled after the departure of D.W. Griffith and nearly all of his best artists in 1913. This year (1916) would include its final new releases, before it became a source only of re-issues of once-great films. It’s interesting to question how Bert Williams became associated with the dying company, and how much this movie did to keep the doors open at 14th Street. Wikipedia claims that this movie was shot by Billy Bitzer, the cameraman best known for his work with Griffith, and who had left with Griffith in 1913 and gone on to work on “Birth of a Nation” in 1915 and “Intolerance” in 1916. “The Silent Era,” a usually reliable source, puts question marks around this claim, but also suggests that Bitzer may have directed (!) as well. Bitzer’s autobiography, which includes a very detailed filmography of his work, makes no mention of the movie at all, so I’m going to assume it’s a mistake, barring new evidence. It’s hard for me to imagine Bitzer and Biograph reconciling for the duration of this one film.