I’m going to skip ahead in my history of horror this week, because I want to cover all of the 1915 episodes of the serial “Les Vampires” before the month of October is over. This serial is often confused for a more typical horror movie by writers who haven’t seen it, because of the title. In fact, it is a kind of follow-up to “Fantômas” by Louis Feuillade – another crime and detective serial involving a master criminal. The name of the “Vampires” is simply a moniker chosen by the criminal gang that leads this movie. Still, with secret passageways, mysterious notes, a murder in a police station, and, of course, a severed head, there is plenty here for horror fans to enjoy. 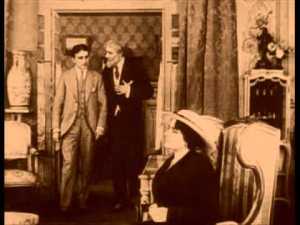 This first episode begins by introducing the intrepid reporter Guérande (Édouard Mathé), who returns to his office after some thrilling investigation, only to find that his files on the criminal gang known as the Vampires is missing. He accuses his co-worker Mazamette (Marcel Lévesque) of pilfering them, then finds the folder on his person after his denial. Mazamette convinces him not to turn him over to the police by showing him a picture of his children, and says he will be forever in Guérande’s debt when he agrees. Now Guérande’s boss calls him in and assigns him to investigate the case of Inspector Durtal, whose body was found in the swamps without its head. After a farewell scene with his mother (who packs his clothes for him by rolling them into tubes), Guérande cables ahead to an old friend of his father’s, Dr. Nox (Jean Aymé), to request permission to stay at his chateau near the crime scene. Dr. Nox agrees, although he is in negotiations to sell the house to Mrs. Simpson, a wealthy American. The three dine together, and Guérande thrills Mrs. Simpson with stories of the exploits of the Vampires and Mrs. Simspon impresses the men with her valuable jewels, which she always carries with her as a security precaution. That night, Guérande receives a note warning him of tragedy if he doesn’t give up the case. At midnight, a thief uses a secret passage to creep into Mrs Simpson’s room wearing a distinctly Fantômas-like costume and steals the jewels. In the morning, evidence has been planted to incriminate Guérande and he rushes out when the crime is reported, leading Dr. Nox to accuse him in his absence. But, Guérande tells his story to the local Magistrate, who agrees to hold Nox and Simpson at the police station while they investigate the chateau together. Instead of the jewels, what they discover is the missing head of Durtal! Now, they go back to the station to confront Dr. Nox, but they find that he has murdered Mrs. Simpson and fled the scene, leaving a mocking note in the name of “The Grand Vampire.” The audience, though not the characters, are treated to the image of the Grand Vampire escaping across the roof and down the drainpipe of the police station unobserved. 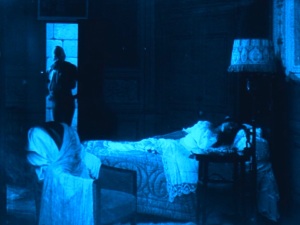 I actually found this first part of the series a bit disappointing, compared to its Fantômas predecessor. I’m hoping that’s because Feuillade is still setting the scene and establishing the situation for greater thrills to come. In spite of the good parts mentioned above, an awful lot of the action in this movie is just people sitting in drawing rooms talking to one another. One interesting parallel between the two series is that both begin with a jewelry heist. There’s fairly little exterior footage, which means we are limited to rather cramped-looking interiors, and sometimes the biggest visual thrill is when the tinting on the film changes from blue to amber when someone turns on a light. I thought it was interesting that our hero is a teetotaler who lives with his mother – neither the American image of the action hero nor of the average Frenchman! So far, the Grand Vampire has been mostly a disguise-wearing Fantômas clone, but I expect things to get more interesting, given the stills I have seen from other episodes.