This is another early short trick film by Georges Méliès, which seems to earn a place in the history of horror films. It incorporates supernatural themes and spooky imagery, but appears mainly intended to amuse and evoke wonder at the magic of cinema. 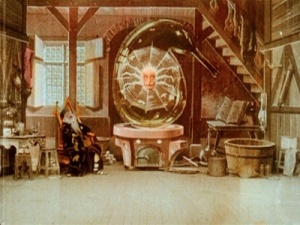 Méliès appears as a bearded and robed magician or alchemist. His dwarf servants show him a grimoire and use a bellows to build up a flame beneath a glass retort then flee the stage. A snake emerges from the furnace and performs some acrobatics, suddenly turning into a green-clad elf or imp. The imp gives the alchemist a wand with a solar symbol on its end, then uses magic to blow the retort up to giant proportions. We see various images inside the retort, most notably a huge spider with a creepy human face. Then smoke pours out of the retort into a bucket that has been placed beneath it. A semi-transparent ghost levitates out of the bucket and dances in air. The alchemist rises from his chair as the ghost disappears, and the beaker suddenly explodes behind him, knocking him to the floor. 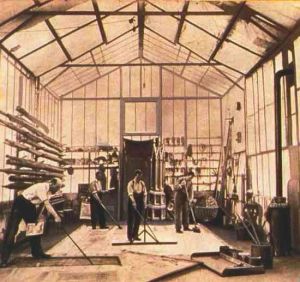 Méliès at work in his studio.

This movie is a good example of the magical performances Méliès used the camera to bring to life. The print I watched was beautifully hand-painted, and, while it isn’t perfectly preserved, gave a good idea of how striking and effective his color films were at the time. There are several instances of double-exposures in the film to make the effects appear at the same time as the alchemist. The enlargement of the retort is also an important effect: I have seen references to “The Man with the Rubber Head” (1901) as the first instance of such a magnification (done by moving the camera closer to the object, creating a close-up), but this was done several years earlier, admittedly not with a human body part. Finally, it is fun to speculate what substance the alchemist had invented in order to see these fantastic images!

I have been unable to find this movie for free online, if you know where it is, please let us know in the comments!