For my first “feature film” for October’s history of horror movies this year, I decided to return to the series I watched when I started this blog. While I did discuss the series and reviewed the DVD collection from Kino Lorber, I haven’t ever gotten around to doing each of the movies. This is the first “sequel,” the immediate follow-up to “Fantômas: Shadow of the Guillotine.” 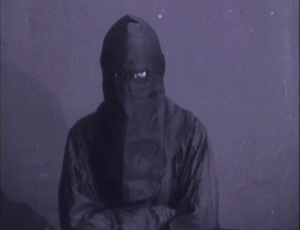 This episode begins with a brief re-cap of the previous one, establishing that Inspector Juve continues his hunt for Fantômas with the aid of the reporter Fandor. They follow a woman believed the be connected, and Fandor manages to be on the scene when Fantômas’s gang holds up a railway car to get the money being transported by her lover, a bank agent. Unfortunately, he doesn’t prevent Fantômas from wrecking a train or getting away. Juve and Fandor both get messages leading them to a dockside warehouse, and shoot at each other, each mistaking the other for Fantômas. Then, the real gang springs up from behind barrels and starts shooting at them. The gang sets fire to the barrels and leave them to burn, but Juve and Fandor get into an unlit barrel and roll into the water, swimming away to safety. They make another attempt to arrest him when he meets the woman at a club called “The Crocodile,” but Fantômas escapes by putting on false arms, and running away as they lead him to a police car, leaving them holding his arms! He then returns to the Crocodile and finishes his evening in peace. Next, Fantômas makes contact with Lady Beltham, his lover from the previous movie, and they begin meeting at her now abandoned estate. Juve and Fandor put on disguises and take a tour of the place, posing as prospective buyers. They figure out a way to hide in a heating duct and listen in on Fantômas and Beltham. They learn that Fantômas plans to kill Juve in four days time with his “silent executioner.” This makes Juve think of a crushed body from an earlier case, so he takes the precaution of putting on armor with nails sticking out that makes him look like a middle-aged member of Immortal. Sure enough, when the boa constrictor enters through the conveniently open window, it is unable to get a crushing grasp and leaves in defeat. Now, Juve and Fandor bring a contingent of policemen to the estate and try to catch Fantômas, who eludes them by hiding in a cistern and breathing through a bottle with no bottom. While Fantômas’s worst plans have not paid off, he remains at large. 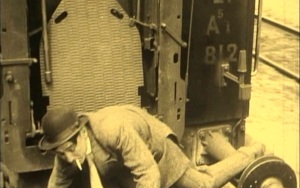 Once again, I have to return to the question of, “is it a horror movie?” Not exactly, it’s a thriller about a super-genius villain and his almost equally clever pursuer. But, I have to think that horror film makers drew from the imagery and ideas of these movies in later years. Fantômas may not be a “monster” in the strict sense, but he calls himself a phantom and has a distinctly frightening costume. He often brings about multiple deaths as he does in this episode, and he hides in haunted houses and abandoned places. In this case, he even uses a snake for a weapon, and his power of disguise makes it possible for him to be anyone.

Snakes and spikes? How many Black Metal bands saw this movie?

The movie, like all of Louis Feuillade’s work, is very well done technically and a visual feast. I particularly enjoyed his exteriors of century-past Paris. He isn’t shy about using close-ups and camera movement, which adds to the excitement. The depth of field of some shots impressed me, particularly in the night club, in contrast to the difficulties Billy Bitzer had with deep focus in “The House of Darkness.” One criticism I have is that there is a heavy dependence on Intertitles and close-ups on documents like letters to explain the story, particularly at the beginning where an especially long letter backfills the audience on what happened in the previous episode. Probably unavoidable, but somewhat dull. Surprisingly, the big action sequences are some of the least interesting visual moments, in part due to the weakness of the special effects of the time. The train crash is handled with a tiny model train and the barrel fire mostly consists of smoke, in contrast to the lovely poster above. I wondered a bit about the frame rate of the transfer – at times it seemed to me that the movie was unnaturally slowed down, and I wonder if they over-compensated for earlier sped-up versions by playing it at a slower speed. The story is, as usual, impenetrably complex and contradictory. At one point, the police are not certain whether a body they have discovered is Lady Beltham, half an hour later, they are releasing her (alive) for “lack of evidence” with no explanation in between. That sort of thing has long been part of the charm of the series, however, so I won’t hold it against the movie.

I have not found the entire movie available free online. You can watch about half of it: here. If you find a free version, please say so in the comments.