The Birth of a Nation, Part IX

Last month, I felt that I didn’t have a lot more to say about “The Birth of a Nation.” This month I find that I do have a few things to add, but we’re still winding down the series. 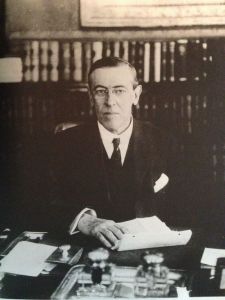 First, Woodrow Wilson: Fritzi Kramer at Movies Silently recently posted a debunking of the dual myth that BoaN was “the first movie screened at the White House” as well as “the first feature film” that is generally very good and covers most of the important ground. I think she goes a little too far in suggesting that the movie was screened to consider censoring its potentially divisive content (the source she referred me to on this didn’t back her up, and there was no precedent giving the President the power to censor movies), but the important points are correct: “Cabiria” had been shown at the White House the previous summer, Wilson agreed somewhat reluctantly to the screening on the condition that there be NO publicity about it (a promise that D.W. Griffith never intended to keep), and he certainly did NOT call it “history writ in lightning” or whatever.

Lest we be accused of being overly fair to Wilson, however, there are a few other points to make here. First of all, he was an old school chum of Thomas Dixon, the author of the play “The Clansman,” and it appears he approved the screening as a favor to his buddy. Dixon, let’s remember, was the driving force behind the racist content of “The Birth of a Nation” (William K. Everson claims the play was even more racist than the movie, if such a thing is imaginable), and was a true believer in the heroism of the KKK and the justifiability of slavery. In his discussion of the correspondence between them, which continued during the Wilson presidency, Dick Lehr mentions no instance of Wilson confronting or even chiding Dixon for his views. Furthermore, it was at Wilson’s instigation that Jim Crow segregation was introduced in the Post Office and other federal agencies, to Dixon’s outspoken approval. All of which is to say that, whatever the conditions and significance of the White House screening, Wilson was every bit as much integrated into the predominant racist culture of his time as others who, unlike him, openly praised the film.

Second, a bit more on the origin of the Griffith Myth. I’ve been reading Seductive Cinema by James Card, who is somewhat of a curmudgeon about film studies in general, and Griffith-worship is among his peeves. On pages 32-34 of this book, he talks about an ad that Griffith took out in the New York Dramatic Mirror in December, 1913, less than two months after he departed from Biograph. Griffith used this opportunity to proclaim himself “[p]roducer of all the great Biograph successes, revolutionizing Motion Picture drama and founding the modern technique of the art.” This is pretty much what his fans still say about him today, but it’s interesting that anyone would have accepted it at the time. Card points out that “[i]n 1913, filmgoers were unaware of the names of any motion picture directors.” In other words, he was the first to proclaim himself a genius, and people went along with it because they didn’t know any better.

But, I think there’s even more going on. In July 1915, while “The Birth of a Nation” was on top of the world, setting new standards for monetary and critical success, Maurice Tourneur gave an interview to the New York Clipper in which he was asked who was the greatest director of the time, and he quickly and unequivocally named Griffith. When I read it, it broke my heart a little. Here was the director of “Alias Jimmy Valentine” and “The Wishing Ring” praising a man whose talent was clearly inferior! It’s as if Ridley Scott said that Joel Schumacher was his favorite director. I think there’s a kind of strategy at work, however. By taking out that ad, Griffith had put directors into the public spotlight. A director who wanted to be taken “seriously” had to affirm his genius, because that was the best way to affirm by proxy that directors were important figures in filmmaking. Between the ad and the runaway success of “Birth of a Nation,” it was career suicide to say anything else at that time. Griffith’s supremacy was now an entrenched myth, which would last a century or more.