In my opinion, D.W. Griffith was most effective in showing intimate vignettes in short format. Even when he wanted to deal with big issues, as is the case here, and in “A Corner in Wheat,” it is the human side of the story that compels. This movie was meant as a progressivist statement about the treatment of old people without families, and it works because it remains very much grounded in a personal story. 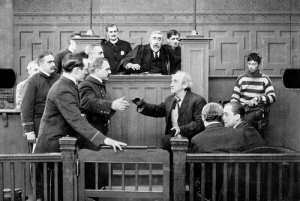 The story begins with a doctor making a house call at the home of an old carpenter. His wife is suffering illness, and the doctor prescribes fresh air, which is lacking in their urban tenement. The old man leaves for work, determined to earn enough to get his wife to the country as soon as possible. Unfortunately, the new foreman is looking for people to lay off, and he decides to cull the oldest workers first, replacing them in their jobs with brawny younger men. The carpenter protests, but is sent out into the street, where he seeks work to no avail, finding that employers value youth over his years of experience. His wife takes a turn for the worse as the money (and food) runs out, so he tries stealing food from what looks to be the kitchen of a restaurant at night. He is caught and held in jail, and tells his sad story in night court, to the disdain of the lawyers and bailiffs who have heard it all before. But the judge, who must be an ancestor of Harry Anderson, sends a cop over to the old man’s house to check on the wife. The cop reports that she doesn’t look good, and the judge pays for the stolen groceries, releases the would-be thief, and arranges for a doctor to attend her in the middle of the night! Sadly, all of this charity is wasted, for when they arrive they find the old woman dead, and the old man hurls the stolen food on the ground in rage and despair. 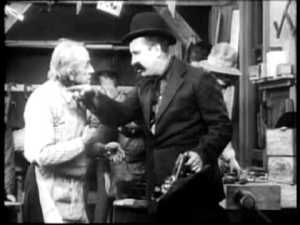 This movie is very simple and kept within a low budget by shooting almost entirely on small sets with artificial lighting. The night scenes are not lit differently to the day, we only know the time from the intertitles. Unlike many films of this period, there are rather a lot of intertitles, suggesting the limitations Griffith was discovering in telling stories with visuals only. The “AB” of American Biograph is prominently placed in the old couple’s apartment, but not in any of the other interior shots. Fairly little editing technique is shown, but during the critical scenes of the man’s stealing and arrest, there are cross-cut edits back to the old woman in her bed, to remind us of the seriousness of the situation. The concept of the protagonist desperately needing to get food to a sick family member, only to be arrested and detained would be re-used more effectively in “The Italian” four years later. This is nevertheless an emotionally effective film, and a good example of how much could be done with so little at the time. Notably, Griffith makes no effort to answer the film’s question, but simply poses the callous standards of modern urban society as problem to be considered, seeming to favor the kind of smaller community where people would be expected to look out for each other as an alternative.