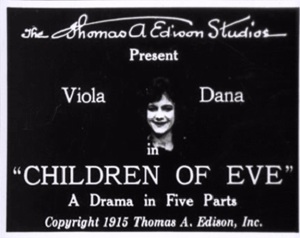 By the end of 1915, the Edison Company had lost its position of prominence in the film industry, and crushing losses in legal battles had guaranteed that it could no longer benefit from the work of others. Nevertheless, it still continued to release movies like this one, no longer innovating and inspiring others, but following trends established by others in the field. Apparently, it was hoped that by making “message” pictures such as this one, they could be perceived as artistic leaders if not industry chiefs. The result in fact was less box office popularity and the final decline of the studio.

“Children of Eve” begins by showing us the meeting of Henry Clay Madison (played by Robert Conness), a studious young man, and his flophouse neighbor, Flossie, a dancer at the Follies. Madison tries to reform Flossie (Nellie Grant), and, in doing so, falls in love with her. She returns his feelings, but fears that she will end up dragging him to her level if they marry. So, she departs, just as Madison is beginning to find some success in business. As it happens, she delivers a baby girl and dies after leaving him, and he takes on his brother’s (?) child as an adoptive son. The son (played by Robert Walker), Bert, is raised in luxury, while the daughter (Viola Dana, the real star of the movie, who went on to do “Blue Jeans” and “Naughty Nanette”), Fifty-Fifty Mamie, lives in poverty, unknown and unacknowledged by her father. She makes her living through cheap cons and winning dance contests, while he takes an interest in social reform, urging his now jaded father to reconsider his child labor practices. They meet when Mamie tries to hide out in the reform office after stealing a large feathery thing from a cart. Paralleling his father’s course, he tries to reform her and falls in love, and Mamie stays up all night with a sick woman and starts reading the Bible, showing her interest. Her real turning point comes when an old cohort shoots a policeman, and Mamie refuses to give him shelter. Meanwhile, Bert gets a fever and yells out her name. Madison affirms his belief in the moral lesson in the note Flossie wrote so long ago, and encourages Mamie to leave Bert as Flossie left him. Mamie is recruited to investigate labor conditions at Madison’s factory, but while she is there a fire breaks out and children are killed by smoke inhalation before the fire fighters can get to them. Mamie is dragged out, unconscious, and given little chance to survive. Madison discovers the old picture of her mother and learns, too late, that this was his daughter. Bert arrives just in time for Mamie to die in his arms.

The central theme of this movie was the dangers of child labor and poor working conditions, and the fire scene was based on the famous Triangle Shirtwaist Fire of 1911, which was still a major scandal at the time. Due to lack of fire escapes and a locked shopfloor, hundreds of women and young girls were trapped in a burning building, with 146 deaths resulting. The director, John Collins, wrote the scene to evoke that event, and tied it in to a message of reform and Christian charity. However, the plot winds up being both overcomplicated and predictable at the same time, and the story never quite seems to come together. In a lot of ways, the movie is reminiscent of Raoul Walsh’s “Regeneration,” of the same year, but it never manages to be as visually or narratively compelling. 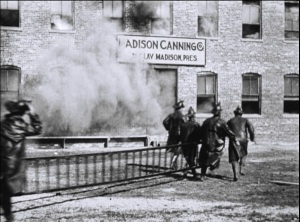 Technically, I’d rate the movie as middling for 1915. There are close-ups, cross-cutting, and some camera movement, but most of the movie suffers from being shot on small sets at 90-degree angles, with “stagey” action. Unfortunately, little of the movie was shot in the streets of New York, which were still close to the Edison home base, and most exteriors just show doorways. There are some good exterior scenes on the rooftops when the cop and the crook have their shootout, and also some visually interesting shots on a large set representing the dance hall. The windows of each tenement apartment look out onto painted flats, but at least the cinematographers thought to have a different view for each one, and also used lighting on these flats to show night- and daytime. The “big scene” of the factory fire is reasonably suspenseful, but doesn’t show any really new or exciting footage – it could almost be Edison’s “Life of an American Fireman,” with better editing.

I have been unable to find a reliable copy for free on the Internet. If you know where one can be seen, please say so in the comments.