Cinecon pulled a surprise on me and screened a bonus Century Film, in a beautifully remastered print. I appreciate this, but it was screened right before the 1918 Mary Pickford vehicle, “M’Liss,” so I hope I don’t get the plots of those movies confused. 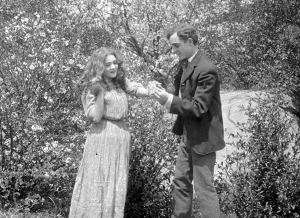 “The Son’s Return” is an early Biograph short by D.W. Griffith, who I think took on a rather too complicated story for his still-developing skills. Imdb identifies the source as “a novel” by Guy de Maupassant, but the short list of his novels on wikipedia includes nothing that looks like French for “The Son’s Return,” so I can’t confirm that. Pickford’s role is actually comparatively minor, though for some reason the movie begins with her frolicking through sunlit glades of flowers. Griffith was into girls frolicking, we know that. Then we are introduced to Charles West, her sweetie, who is the real center of the narrative. His parents are running an inn in New England that isn’t doing well, but he has decided to move to the city and seek his fortune. He does remarkably well, apparently getting a job on Wall Street or in a major bank, and he stays for five years, apparently forgetting his rural roots, and growing a beard. One day, a letter from Mary comes, telling him that his parents are on the verge of bankruptcy, so he announces to his boss that he’s taking some unplanned time off, and takes a train to town. No one (including his parents) recognizes him with his beard and expensive clothes, and he decides to “surprise” everyone by pretending to be a stranger and checking in to the inn. The landlord is threatening to turn the parents out into the street any day, and when this big-spending stranger shows up passes out fully clothed in his hotel room, they decide to take desperate measures. They club him and steal his wallet, only to decide that he’s dead after a cursory check of his pulse. Then they find the locket with the mother’s picture that demonstrates his identity. Grief- and terror-stricken, they dump the body and run back to the inn. Now Mary comes along and finds the “body,” which acts like it has a terrible hangover. Mary, who recognizes him at once, calls a doctor and the police, assuming that he’s been the victim of highwaymen. The parents decide they cannot live with their crime and show up to turn themselves in, but of course their son forgives them when they fall on their knees. 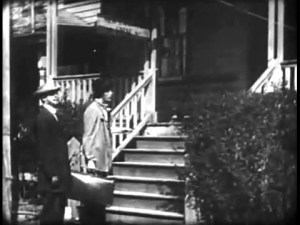 This isn’t necessarily a bad storyline for a movie, and it might even have worked in short format, given Griffith’s later skills, but it was a bit ambitious for 1909. The biggest problem is the suspension of disbelief that a man’s parents can’t recognize him after only five years because he has grown a beard. Even my extremely near-sighted mother never had this problem, even when I was dying my hair and cutting it in punk rock fashions. He needed a bit more of a disguise. It’s also unclear why he chooses to sleep in his clothes, and the question of day/night is never adequately settled by Billy Bitzer’s photography. When the parents sneak up to the room, they make a point of taking a candle, suggesting that it is night, but there is no attempt to show this through lighting (aside from which, there is a plainly visible burning candle in the room already when they enter, so the second one was unnecessary). The parents presumably dump the body at night, but when Mary walks up a minute later, it appears to be daytime – which is both an editing issue and a lighting one. Editing the whole story more tightly might have heightened the tension and also made it easier to ignore the other problems, but no doubt Griffith was still learning how to do this.