Fatty and Mabel at the San Diego Exposition (1915)

This Keystone short came early in 1915, just after Charlie Chaplin left the company to join Essanay. Interestingly, it resembles a more ambitious version of “Kid Auto Races at Venice,” his first “Little Tramp” release, in that it is a slapstick comedy shot on location at a major public event, using the backdrop of crowds and spectacle to boost the apparent production costs. It is both more and less successful than its predecessor, inasmuch as the comedy storyline is much better developed, but it lacks the innate charm of Chaplin simply doing his routines in front of a camera and a crowd.

Roscoe “Fatty” Arbuckle and Mabel Normand are visiting the Panama-California Exposition in Balboa Park, in San Diego, California. They are apparently a couple, and do not behave like celebrities in this movie. At the opening parade, they fail to keep behind the lines erected to keep spectators out of the street, resulting in a Keystone Cop’s chasing them and battling them, which only causes more chaos. Then, they go for a ride on what seems to be a self-driven roller-coaster car with no roller coaster. They stop at an exhibit that promises to show “how movies are made” and Mabel gets off to gawk at some footage of the Keystone Labs. Fatty, meanwhile runs into another young woman (Minta Durfee, his real-life wife), and pursues her with his kiddy-car, which leads to more pratfalls. Mabel is annoyed when she can’t find him and gives him what-for, when he tries to pretend he was innocently watching the Hula dancers at the Hawaiian exhibit. After that, Fatty decides that he will go see the Hula dancers, and we see him whooping it up in the audience. Mabel decides to sneak in the other way and “catch him in the act,” but winds up at the stage door. Then she gets the clever idea of wearing a veil and going out to do a truly hilarious dance looking sort of like a shapeless sack wearing a veil. Fatty is aroused and joins her on stage, but when he removes the veil, she knocks him over again. He runs out, finding Minta has brought her husband along to get back at him, and more chaos ensues. Ultimately, the Keystone Cops are called in and several people are knocked into a very showy fountain.

Mabel is shocked to find herself on a Keystone set.

It should be obvious that this was a much less improvised movie than “Kid Auto Races” was, and in fact some parts (for example the whole sequence in the Hawaiian pavillion) were almost certainly shot at the studio and edited in. Nevertheless, it is an effective example of a Keystone comedy and it is more visually interesting by virtue of the location. When Fatty and Mabel are in front of crowds, those crowds are paying attention to them, and obviously enjoying themselves, although they don’t appear to look at the camera. For the fountain sequence, we can see large crowds that are being kept at a distance from the main action, showing that Keystone had the ability to shut down parts of the event for filming. No doubt this was very short and impromptu, not a question of getting a license and city police cooperation as is done today. Both Normand and Arbuckle are at the top of their game, and the other Keystone players also acquit themselves well. Towards the end, for no apparent reason, a fellow dressed as Chaplin suddenly shows up – probably because audiences were still clamoring for him even though he’d moved on. 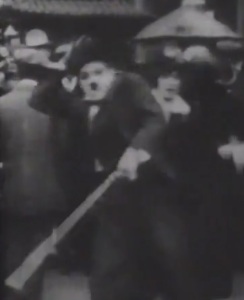