This was one of the two first movies ever released by Keystone studios – it was released along with “Cohen Collects a Debt” as a split-reel, or a type of early double-feature. It was directed by Mack Sennett and prefigures the Sennett Bathing Beauties that he would later feature to save the studio after Charlie Chaplin and other major talents had left. Mabel Normand has the title role as a young woman who is dating Sennett and wants to get in good with his parents. Mack’s advice is that she go to the beach and “vamp” his dad, who is apparently something of a wolf. Dad is Ford Sterling, who actually carries pretty much all of the comedy in this short. True to form, he flirts outrageously with Mabel, all the while being annoyed by some young guy who won’t leave either of them alone. Mabel gets into a very 1912 swimsuit – absolutely no flesh revealed, apart from forearms, but it does outline her figure, and Ford gets into something utterly ridiculous. There are a couple of dives off a pier, and then they return to the club where Ford discovers his wife got tired of waiting and left. All the better, he thinks, until Mack and mom come up and introduce Mabel as his girl. Ford does his patented “curses, foiled again” bit. 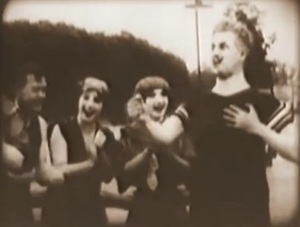 The film is light on slapstick and heavy on situational comedy. The print I was able to see didn’t make faces very clear, but you can tell that Ford’s expressions are key to a lot of the humor. Mack plays everything very broadly, but doesn’t have the natural comedic body language of Sterling. Mabel, on the other hand, is mostly there to look pretty, which she does, but we only see minor flashes of her talent as a comedienne. Her best bits come when scheming with Mack how to fool his dad. Sennett, or his cameraman, economize on setups and editing. Mostly we see everything in a limited number of shots, with the actors generally framed from the waist up. I don’t think we ever cut between two simultaneous events – each shot follows the last one sequentially – except at the very end we see Mack laughing at his father from just out of view at the club.