One thing that often surprises people about the early period of film history is that there were women in positions of authority and artistic control. The common assumption is that gender relations were so fixed in the late-19th and early-20th centuries that women were only there to be exploited and displayed for male pleasure. While there’s plenty to be critical of in terms of gender in front of and behind the screen, an accurate narrative is of course more complex. I’ve mentioned before some of the work of the woman who was a true pioneer of the cinema – Alice Guy-Blaché (and I hope to review more of her works soon), but I hadn’t yet had a chance to speak about her American protégé, Lois Weber. This post will correct that.

However shocked audiences are today or then by Weber’s gender, they were even more shocked by this movie’s content, which includes full-frontal female nudity, possibly the first time that occurred in a non-pornographic context in American film. Its inclusion emphasizes the fact that Weber clearly considered the cinema to be an art form (contrary to those who insist that no one but D.W. Griffith saw this at the time), and its use is deliberate to jolt a complacent audience into awareness of the movie’s message. This film is in that sense simultaneously subversive and also supportive of morality as it was understood by elite classes at the time. The fact that its “shocking” content was used to support a Christian message is precisely why it was able to succeed where a more explicit challenge to social order would have been completely suppressed. 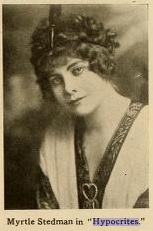 The movie consists of a short series of overlapping vignettes. First, we are introduced to the actors in both medieval and modern dress through a series of dissolves. Then, we see the “naked truth” (and she is), who opens a gate, symbolically raising the curtain on the film. “Naked truth” is transparent due to traveling double exposure shots, but we can make her out pretty well. Our characters are then shown to us in a “modern church.” Gabriel, the pastor (Courtenay Foote, who would appear in “His Parisian Wife” and “Tess of the D’Urbervilles”), speaks to them all about hypocrisy, and through a series of close-ups and pans, we get a clear sense that his message is not understood by most of the listeners. This is emphasized when a group of wealthy-looking parishioners outside the church speak of asking for his resignation (“but keep my name out of it”) after congratulating him on a great sermon to his face. Gabriel reads about a statue in Paris representing “Truth” that has been censored, and he imagines himself transformed into a medieval monk. The next sequence involves him, still in monk’s garb, leading his flock on a path through the forest. He comes to a narrow path which breaks off from the main road and is steep to climb, and begins climbing it, urging the others to follow. Only a few do (or can). The message here is made clear when one of the wealthy parishioners refuses to put down a large bag of gold in order to climb the path.

The “meat” of the story begins when Gabriel finds the naked Truth in the forest, having left all of his followers behind, in part because he refuses to assist the one who seems truly sincere – a young woman who may or may not have a crush on him (Myrtle Stedman, later in “Peer Gynt” and “The American Beauty”). Since he cannot bring them to her, he resolves to bring her back to them. Suddenly he is in a medieval monastery, and “after meditation and fasting,” begins work on a secret statue. The one other monk who peeks at it is horrified, but says nothing. On the day of its unveiling, the entire town turns out in its finery. It is, of course, the nude. Everyone is shocked, and riot breaks out. Gabriel is killed. Then, back in modern times, he, accompanied by the naked truth, goes to various places in town representing “politics,” “society,” “the family,” etc. and the Truth holds up a mirror, showing him the base motives behind the apparently upright behavior of the citizens.

Modern viewers may find this heavy-handed or moralizing, or even funny at times – as when “immodesty” is represented by a group of young bathers in full-length bathing suits that cover them almost to their knees. Even I don’t really get the attitude taken toward “the Woman,” who clearly wants to do right but is consistently abandoned by Gabriel. But it is a very effective and surprisingly creative film. Camera angles and editing are quite modern – ahead, I would say of “The Birth of a Nation,” which was released in the same month. She uses close-ups frequently to bring us intimacy with her characters, and her use of panning cameras is well in advance of anything of the time, including “Cabiria,” whose pans famously inspired “Intolerance.” In the scene with the riot, the camera pans past each group of citizens, allowing them to have their personal reactions to the statue, and growing more chaotic with each movement.

It’s not surprising that this movie resulted in cries for censorship (it was banned in Ohio) and, it is rumored, even “riots” in some places. What is surprising is that it apparently didn’t hurt Weber’s career. The Moving Picture World gave it a very generous review and predicted “a long and emphatic popularity” for the movie. This seems to be correct, as Weber reputedly went on to work at Universal as one of their highest-paid directors and later was the first (and for a long time only) woman to be inducted into the Motion Picture Directors Association in 1916.

I have not been able to find this for free on the Internet. A clip is here.