Charlie Chaplin arrives for a day of work at Keystone.

Once again, I’ve found various “edits” of this early Charlie Chaplin Keystone short, with different intertitles and lengths. I’ll discuss the differences at the end, but first I’m going to focus on what I believe to be the more authentic “original” version (at least it’s longer).

Charlie is employed at a film studio called…Keystone Studios! In fact, this movie clearly saved on money by using the existing studio for its location, but also may have deliberately given curious audiences a peek inside the “dream machine” that produced their favorite comedies. This is emphasized by the fact that the opening shot gives us Charlie in his street clothes, with no makeup on, and then the movie proceeds to his dressing room, where he turns by stages into the “Little Tramp” we’ve come to know so well. Along the way, he meets up with Fatty Arbuckle, another major Keystone star, and Fatty tricks him into drinking hair tonic before they both bump heads across the dressing room table for slapstick effect. Then he goes out to the set, where he is given simple instructions of when to enter and what his cue is. Unfortunately, he’s distracted by some pretty girls (including Fatty’s then-wife, Minta Durfee) and misses the cue, so the director replaces him with Chester Conklin. Then he messes up THAT shot, and is thrown off the lot entirely.

The next scene shows a very attractive, though conservatively dressed, young woman applying for a job at Keystone. All the boys are crazy for her and the director is particularly amorous. She convinces him to let her take over the boys’ dressing room (surely there’s a women’s dressing room somewhere, but never mind), and when she finally gets him to leave, she takes off her wig and turns into the Little Tramp. It’s been Charlie all along! The director is bullied by the men into finding out what’s taking so long, and finds him there with her clothes, slowly putting it together and initiating a fast chase with everyone in the joint. Charlie throws some bricks at his pursuers, but he ends up knocked by one their missiles into a convenient well. The gang resolve to leave him there.

Since this movie was directed by Charlie himself, I’m less inclined to blame him for the unfortunate re-edit, which may have been done by the studio while they still held the rights. This re-edit cuts the entire scene with Charlie missing his cue and jumps to him interfering with Conklin for no apparent reason. The added intertitles are, as usual, not helpful to the comedy, and one of them actually telegraphs the fact that Charlie is the new girl on the set, ruining the surprise when s/he takes off the wig! Of course, if you read this review before watching, that was already spoiled for you… 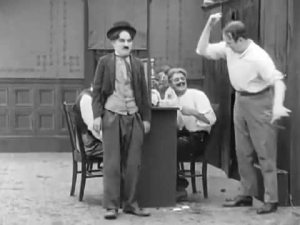 You can watch it for free: here (original, no music) or here (re-edit, with music).