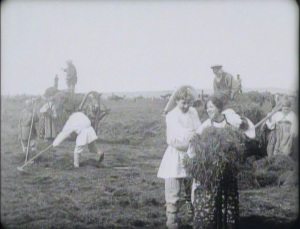 Making hay while the sun shines.

While American film makers like D.W. Griffith were making “progressive” films about the hardships of working people in the USA, Russian film innovator Vasily Goncharov did something similar with this movie. It might also be seen as a more sophisticated version of his “16th Century Russian Wedding,” except that there’s no surviving wedding, just a melodramatic story of young Russians in love. This movie once again illustrates the superior artistry and emotional power of Russian film in the pre-revolutionary period.

What’s that behind your back, Ivan?

Here, young Petr (Ivan Mosjoukine, who we’ve seen in “Christmas Eve” and “House in Kolomna”) is in love with Masha (Aleksandra Goncharova, from “16th Century Russian Wedding” and “The Brigand Brothers”). They make time together in a haystack, to the approval of his father, and convince her father that they should be wed. While they are planning, a fire destroys the house of Masha’s family, and they sink into poverty as they are forced to sell off their most important possessions, including the cow that brought in most of the family income. Masha goes to the city in search of labor, as many young peasant people did in Russia during the Czarist period. Just as with an American film in which a healthy, honest young woman from the farm seeks her fortune in the city, Masha soon falls into a dangerous and corrupting situation. She becomes a serving-girl to a wealthy man with an automobile and ulterior motives. Back on the farm, her father becomes ill and the family dispatches a letter asking her to send money quickly. She gets it the only way she can see how – by asking the master for it and doing what he asks in return. She delivers the money, and confesses how she got it, and she and her father commiserate over their unfortunate lot. Petr is now married, and Masha turns to another suitor, but they seem to be mooning over one another as they work together in the fields once more. The version I saw ends suddenly with a shot of Masha’s wedding, she not looking happy at all in her finery. 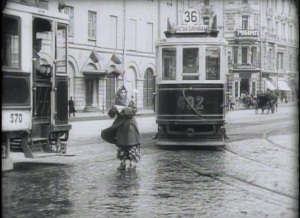 As the fortunes of film preservation would have it, that’s all we have of this movie, because the last reel was lost at some point when the Soviets were “preserving” all Czarist-approved movies. It’s hard to imagine a happy ending, but there might have been a clearer lesson. As it is, we get enough of the flavor, at least to see what Goncharov was doing in trying to make a film about the Russian people (idealized though his view of them seemed to be), rather than Russian high culture like Pushkin and Tolstoy. Especially noteworthy here was the camerawork of Louis Forestier, the Paris-born cinematographer (he also shot “The Brigand Brothers” and “Queen of Spades”). He’s very interested in what the camera shows, what it does not, and when and how to reveal things. In one shot, a critical feature is blocked by Ivan Mosjoukine’s gangly frame in the middle of the shot, until he turns and sees it in the distance, and suddenly that becomes the center-point of the action. In another, a pan begins with two characters seemingly in a harsh street environment, then slowly revealing another direction for them to walk off towards the front plaza of the rich man’s house. The scene where Masha first arrives in the city is highly reminiscent of the farmer couple’s entrance to the city in “Sunrise,” except where F.W. Murnau had to build an elaborate crane and expensive street-set, Forestier gets the same effect with real streets and streetcars, without even needing a close up to achieve it.

Speaking of which, Fritzi Kramer, over at “Movies Silently,” says that this movie “aches for close-ups.” There aren’t any. There aren’t any Intertitles either, and although I had to watch it twice to be sure I caught everything, I don’t regard either of these as weaknesses. We maintain a distance from our subjects in part because they are more archetypes than individuals, but more importantly because it seems like the respectful distance they would ask of us. They are not prudes, these Russian peasants, but they don’t just let any stranger into their intimate worlds. The lack of Intertitles in a semi-literate world also seems highly appropriate. Each outdoor shot takes beautiful advantage of the countryside, and the indoor spaces are always at a pleasing angle, rather than the square “stages” of a Biograph production of the time. Overall, I found it as affecting as the best of Griffith’s melodramas, and better shot than any of them.

I have not found this for free on the Internet. If you do, please say so in the comments.