This Charlie Chaplin film from Keystone studios works as a kind of sequel to “Kid Auto Races at Venice.” At least some of it seems to have been filmed on location at a live event, but this time Charlie’s acrobatics noticeably engage part of the crowd, and there is a much bigger cast for him to play off. It was directed by his co-star, Mabel Normand, about whom he would say mean things in his autobiography years later. In this, she keeps up with him in terms of physical comedy and audience sympathy. 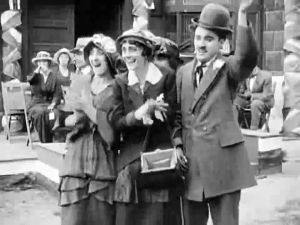 Mabel and Charlie both enter the grounds of the races under questionable pretenses. She wants to get in to sell her hot dogs, and bribes a cop (Chester Conklin, from “The Masquerader” and “Mabel at the Wheel“) with a free sample to get in a side door. He tries to bluff his way in the front, and winds up chased by several cops, and knocking them down several times in the process of getting away. She gets ripped off by a couple of customers (including Mack Sennett, studio owner and reputed boyfriend of Mabel), and Charlie gets into trouble while flirting and going through women’s purses. They meet up and he distracts her in order to steal her hot dogs, then becomes wildly successful at selling them, although he also fights with some of his customers. Mabel goes back to the cop and gets him to threaten Charlie, which can only lead to more chaos. 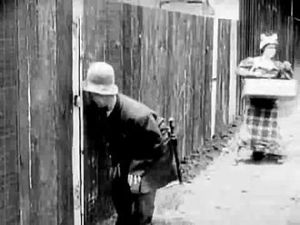 Altogether, it’s pretty primitive slapstick, and not up to the standards Charlie would later set but it’s better than some of the really early shorts he made, and is a chance to see quite a number of Keystone regulars all in one place. Certain edits suggest that parts were shot on location and part back at the studio, and they mesh pretty well if you’re not looking for it, showing that it was less spontaneous than it at times appears.