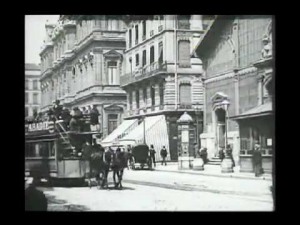 The final movie of the Lumière brothers’ premiere in 1895 was this simple street scene. It’s the sort of movie that serves as photographic evidence of a place, and is thus useful, but not as interesting as most of the others from this set. The street is bustling with activity, and we can see that all of the traffic is horse-drawn, no motorized vehicles are present. Lumière has placed his camera at an angle, producing a photographically pleasing shot, where most of the American cinematographers of the period would have placed it more dead-on. We also get glimpses of nineteenth-century French fashions of the time, with stovepipe hats, long heavy dresses, and many people carrying parasols against the sun. But, because this is a public square, and not the bourgeois confines of the Lumière home, we also get to see some examples of more working-class attire, with uniforms, caps, and work suits in evidence. The architecture is also lovely, and it appears that much has been preserved today.