It’s high time I watched and reviewed this movie, which came out at the very beginning of 1915 (January 20) and was a big hit for the up-and-coming film entrepreneur William Fox. who founded the company that became 20th Century Fox and all of its derivatives. More importantly, it is known as the movie that launched the career of Theda Bara, who was one of the most important female stars of the Silent Classical Era, and also the movie that gave us the concept of the “vamp.” In fact, the film is based upon ( play based on) a poem by Rudyard Kipling, called “The Vampire,” and for some time in contemporary media, women such as Bara played were called “vampires,” without intending any supernatural or life-after-death elements. A “vampire” was a woman who lived off of men, luring them and exploiting them until they were no longer useful, then moving on to another. 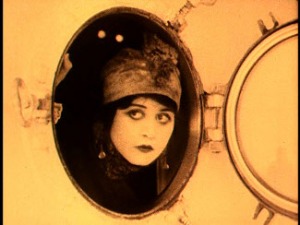 The above is an adequate summary of the plot of the poem and the film (and probably the play as well). A prominent businessman (Edward José, who was a Belgian actor, and also appeared in “The Stain” and “The Perils of Pauline”) is sent to England as a special envoy. Due to an accident, his wife’s sister is laid up and he has to leave his family behind as he sails across the ocean. On the boat, he meets the Vampire, who has just thrown over her drunken fool of a victim, a young lad who shoots himself as the boat begins to sail. Soon, they are together in Italy, where he is lavishing her with attention, and utterly ignoring his diplomatic assignment. He is seen by friends, and soon word gets out that he is neglecting his duties. He can no longer gain admittance to fancy clubs, and he is discharged from his job. His wife debates divorcing him, but chooses to stick it out. He goes back the US and takes up residence in the Vampire’s flat, but he’s drinking heavily now and noticeably aging. The wife makes an attempt to recover him, but the Vampire kisses him, and he’s trapped. His decline continues to its inevitable tragic end.

Now, I was expecting a lot from this movie. Without getting overly personal, I’ve played the “fool” a few times in my life, and I fully expected to see in Bara the faces of women who’ve torn me up inside (or inspired me to tear myself up, more accurately). Instead, I saw a rather strong facial resemblance to Margaret Dumont. It doesn’t help that her character seems to be angry most of the time, or coldly dismissive. Nor that her wardrobe is generally heavy, unrevealing, and shapeless. I guess one could say that she comes across as dominating, and there are men who like that, I know, but I was surprised at how little sensuality she displays. The one time she seems aroused is when she first sees the “fool” on the boat, and there her heavings looked to me more like an asthmatic attack than an orgasm. Maybe it was that heavy dress that made it hard to breathe. 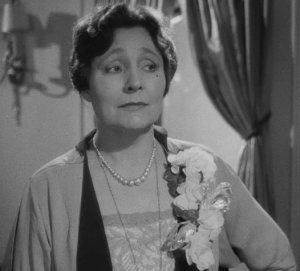 Seriously, I can’t be the only one who sees this?

Whatever my personal response, however, there is no denying that audiences at the time found Theda Bara exciting, and she shot to fame almost overnight when this film was released. The reviewer in the “New York Daily Mirror” expressed considerable enthusiasm for the movie, and was especially pleased that the producers had not tacked a happy ending on to it (people were already bothered by that 100 years ago). I’ve also seen a good deal of discussion in “Moving Picture World” of the harmful moral effect that the popularity of “Vampire” films had on the industry as a whole, although no one ever called out this picture as a bad example.

Bara’s career, as important as it was at the time, remains something of a mystery to us today, because almost all of her other major films are lost, while what we have a great deal of studio hype, much of which was blatantly phony. Fritzi Kramer, at Movies Silently, discussed this recently, in connection with a recipe Bara ostensibly devised. She did wind up typecast as the “Vampire,” of course, and in reality was apparently a fairly shy, demure woman. Later stills from her turn as “Cleopatra” show that as the Teens continued, she at least got out of those heavy shapeless dresses.