Execution of Czolgosz, with Panorama of Auburn Prison (1901)

Last year, on July 4th, I posted about the first filmed footage of an American presidential candidate, “William McKinley at Home in Canton, Ohio.” It seemed like a good way to link the heritage of the United States to the early film industry, and it was a short film that was easy to download and review. Much to my surprise, it rapidly became the most popular movie review, in terms of hits, on my entire blog. It has since been surpassed by Charlie Chaplin’s “The Tramp,” but still holds a respectable position. Americans remain fascinated by the history of the Presidency, it seems.

Having started with the beginning of McKinley’s presidential career, I’m following up this year with its conclusion. On September 6, 1901, President William McKinley was shot by an anarchist assassin, Leon Czolgosz. He lingered, then died about a week later. The country mourned as several films were released showing his funeral parade, the public process ending with this movie, made by Edison studios and directed by Edwin S. Porter, the man who would make “The Great Train Robbery” just two years later. Porter’s original plan had been to film the actual execution, but he was refused permission by the prison authorities. So, he improvised. 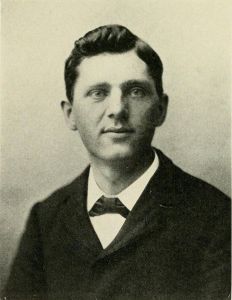 What we see at first is a “pan” of the prison walls, the beginning of which coincides with a train passing, although there is a jump-cut mid pan and the train disappears. The bleakness of the location is underscored by the leafless trees (this was shot in October or November). Supposedly, this footage was taken on the day of the execution, and, given that Porter had planned to be there in order to shoot that day, it seems possible. Then we cut to a very obvious set, and see some less obvious actors take a man disguised as Czolgosz from a cell. Next comes a view of a large room with a strange-looking device in the middle. Some electricians, it seems, are checking out the electric chair. Once they are satisfied, the prisoner is brought in and hooked up. The electricity is turned on three times, and each time he stiffens, then relaxes. Finally, two doctors check him with a stethoscope, and confirm that he is dead.

The above is done in three shots, edited together in sequence. This was a fairly new idea – previously a single movie meant a single strip of film shot continuously, and attempts to tell longer stories had been made by shooting a series of short scenes, which were sold separately and not necessarily screened in order. This new way of taking bits of a film from different places and stringing them together allowed for much more sophisticated story-telling, essentially giving us the birth of film editing. Note also the use of the panorama of the prison as an “establishing shot,” as is often done when the outside of a building is shown before the action moves inside to a studio space, signaling to the audience that the action takes place within the building just seen, in the context of the story, when of course it may have been shot in an entirely different location in reality. 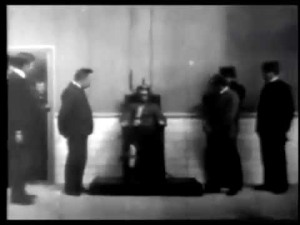 What’s not entirely clear is whether audiences knew they were seeing a reenactment of a execution, or whether they thought they were witnessing the actual event. Edison’s catalog was honest enough in selling to distributors, but it’s hard to know what exhibitors were saying to their customers. Today it is easy to spot the phony walls of the prison interiors, but were inexperienced audiences of 1901 as discerning? I don’t know for sure. It also seems likely that the movie would have been shown with a narration by the exhibitor, or at least mood-setting music, which makes the presentation different from what we get to see. It was apparently a popular item at the time, which may be interpreted as a morbid fascination with death by audiences, or a sense of justice and wanting to witness the important historical events of their time.

Camera: Possbly Porter or James H White (or both)