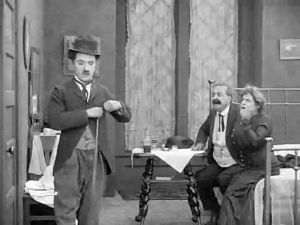 Charlie Chaplin teamed up with the Keystone Kops for this simple Keystone comedy in May of 1914, assuring that it would have the key elements of “a girl, a park and a policeman.” In this case, it also has two of Chaplin’s better foils, Mack Swain (most famously co-starring in “The Gold Rush” and also in “Tillie’s Punctured Romance”) and Alice Davenport (also in “The Star Boarder” and “The Property Man” in 1914). Here, they are a married couple who Chaplin meets in the park, attempting in his drunkenly naïve way to flirt with the wife before being driven off by the husband. In a typically Keystone coincidence, Charlie winds up in the same hotel, and the wife’s problem of sleepwalking leads to further problems before Charlie finds himself soaked in his pajamas during a rainstorm. His drunk act is the real hit of the show, particularly his difficulty ascending the stairs to his hotel room. This was actually the first movie in which Chaplin directed himself, reputedly because Mabel Normand now refused to work with him while Mack Sennett couldn’t afford to fire him. There’s nothing outstanding in the direction here, but clearly in the roughly four months that he’d worked at Keystone, Chaplin picked up the essentials of running a taut comedy with multiple screens interacting to heighten mayhem.