The Birth of a Nation, Part V

For this entry in my series on D.W. Griffith’s 1915 epic, I want to speak about the contemporary reception to the movie. Up to now, I’ve been arguing that the importance of the movie has been over-rated, often at the expense of an honest assessment of its content and what it says about the history of cinema. It wasn’t as big a technical breakthrough as has often been claimed, nor was it the “first feature film” (it wasn’t even Griffith’s first feature film), nor the “first blockbuster” or really much of the first anything. So, why do so many historians and filmmakers seem to regard it as such a big deal?

Well, part of that answer starts with the media campaign and critical response in 1915. To confirm just how big a deal it was at the time, I went and looked at the Moving Picture World issues for the end of 1915 and searched for its name. The movie actually had its first screenings in January, and officially premiered in LA in February, and movies at this time usually ran for a week or two at most, so just finding mentions of it being held over in New York week after week in October, November, and December was already an indicator of just how big a smash it was. There were still cities where it was opening for the first time as well, and these would list prices from 50 cents to $2 for seats (a lot of money in 1915) and packed houses of 2000 people or more. Many of these people, it was presumed, had already seen the picture in neighboring cities, or when traveling to larger urban centers. It broke records for screenings and attendance in various places during this time. In October, a story broke about a distributor paying $250,000 for the rights to it in 16 states, which was reported as “the largest transaction ever conducted for the rights to a traveling attraction in the history of the American theater” (later stories suggest that this may have been exaggerated). 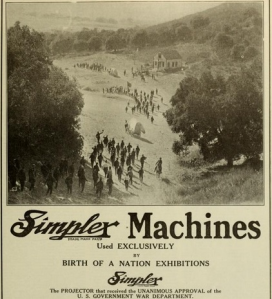 Beyond the box office, I found that “The Birth of a Nation” was also treated as a major artistic achievement. Even passing mentions of the film frequently referred to it as “the big Griffith spectacle,” “this wonderful feature,” a “masterpiece,” or “an immense picture creation.” Studios compared their new releases to it, claiming them as “second only to The Birth of a Nation” or a movie with action that “outdoes ‘The Birth of a Nation’ in thrills.” One film was released as “a Birth of a Nation among children’s films,” and a new Mutual comedy was touted as “The Mirth of a Nation.” The Simplex projector company proudly stated that its machines were “used exclusively” for screenings of “The Birth of a Nation,” which were referred to as “the greatest production in the world.” The movie appealed to people who didn’t usually praise film at the time: the Minneapolis Superintendent of Schools is quoted as saying that “all children should see such pictures” and a Wisconsin pastor “thanks God” he lives in an age when he can see it. 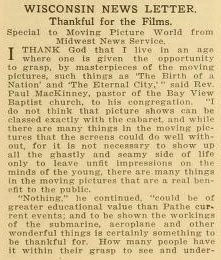 All of this despite the fact that the movie met with resistance from the NAACP everywhere it opened, and that African Americans tried to get it banned anywhere they had a voice. The Moving Picture World, of course, was strongly opposed to censorship, and it’s even possible that to some degree their support of the film was a statement in favor of freedom of expression. But, the word “censorship” didn’t have the stigma then that it does today, a great many people did feel that there should be some kind of state control over what could be presented to audiences in theaters. Yet, again and again, and in spite of some strident arguments for the potential harm that could be caused by the racist material in the movie, white city counselors, official censor boards, and higher government officials passed the film, allowing its performance despite the objections of a part of their constituency. 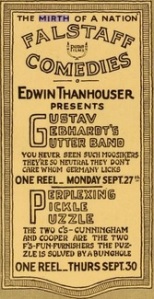 The other aspect of all this that seems puzzling is that, when I look at the film now, it really isn’t all that impressive; least of all by comparison to other movies coming out in the US at the end of 1915. Maybe in February and March of that year there wasn’t much to beat it, but by the last months you’ve got “Carmen,” “The Cheat,” “The Italian,” and “Alias Jimmy Valentine,” all much more technically advanced, visually sophisticated, and narratively complex movies. Yet people at the time were still holding it up as the measure of cinematic greatness, and apparently being taken seriously, to judge again by box office success.

I may need several more essays to discuss usefully why this should be the case, but it begins with two points: white middle class audiences at the time lived in an environment where there was “nothing wrong” with the racial views the movie espoused, and Griffith successfully exploited the desire of white Americans everywhere to celebrate their national and racial pride. Reports of the record-breaking screenings in Portland, Oregon make much of “a score of horsemen clad in Ku Klux regalia [who] were a common sight on the streets” during the run (it will be recalled that Oregon had the highest per capital Klan membership in the nation only a few years later). The movie was shown at elaborate “movie palaces” or high-class dramatic theaters, with a full orchestra and uniformed ushers, not in second-rate nickelodeons. Moreover, it was one of the most explicitly nationalist features to come out of the US in that year. Other nations, especially Italy and Russia, had gotten in ahead in terms of making nationalist epics, and the Italian ones, at least, had been released in the US to the amazement of viewers. But they were the stories of foreigners, and I think Americans wanted to feel that their history was as important as the Punic Wars. Griffith gave them that, and whether his telling of it was true or not, it did conform with the historical myths that many believed, or wanted to believe, about their country. That this meant trampling on the dignity of a minority was far less important at a time in American history when African American enfranchisement was still tenuous, at best.

2 Comments to “The Birth of a Nation, Part V”