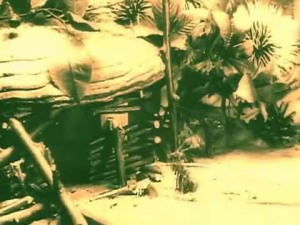 Ladislaw Starevich is one of those figures in film history who is unknown by many, but loved by most who do know him. He more or less “invented” stop motion photography – that’s not to say he was necessarily the first to do it, but he figured it out without being taught by anyone. While working on a nature film on the battles performed by stag beetles, he discovered that they couldn’t survive under harsh movie lights, but that he could make animatable “puppets” from their corpses and shoot them one frame at a time, thus simulating the combat. He soon graduated from making faux-nature films to telling stories, using little dead insects as his performers. This story has been told many times since (usually in English as “The Ant and the Grasshopper,” but I’m sticking with the DVD edition’s title for now), and is a sort of morality fable in which the hard-working ant survives a cold winter because he’s prepared for it while a more fun-loving, lazy creature perishes for lack of foresight. Because it’s based on one of Aesop’s Fables, this more or less conforms with expectations that animation is a format for children’s movies, but this would not hold true for most of Starevich’s work. Even here, the cruelty of the ant in turning away his “relation” seems to militate against modern concerns about children’s sensitivities. It struck me that, since the dragonfly/grasshopper in this movie is a musician, there’s also something of a message regarding the STEM fields and the Humanities underlying this version – a society which doesn’t value its artists will see them all die off in the Winter! On the other hand, the grasshopper/dragonfly does seem to have a drinking problem, and maybe that’s part of the moral as Starevich saw it.