This short comedy stars Charlie Chaplin’s brother, Sydney Chaplin, whom Charlie had managed to get a job at Keystone before he left for Essanay. Syd only worked for Mack Sennett for a short while before going on to become Charlie’s manager, so this movie is one of the few insights we have into his talents. Like Charlie, he had learned his stuff doing broad comedy on the British vaudeville circuit, and he seems comfortable with slapstick. He actually reminded me a little of John Cleese, but that may have to do with the beginning of the movie, which is sort of like “Fawlty Towers.”

As the movie opens, Syd is in a situation that Charlie’s “Little Tramp” would find familiar – working at a hotel with an abusive boss and customers. He has a brief flirtation with a “peach” of a hotel guest, but mostly he is chased with umbrellas, shoes, and bottles. In the midst of all this, an “inventor” comes down stairs, and Syd manages to escape all the slapstick violence long enough to serve as waiter to him and his guest. He serves them from his pockets, and my biggest laugh came when he pulled an enormous loaf of bread out and chopped off pieces for them. The cook in the kitchen is a young Harold Lloyd, but he doesn’t really show off his future talents in this piece. Syd realizes that the guests have something cooking with a submarine, and figures out how to eavesdrop on their discussion and steal the papers the “inventor” was giving the other man to make him commander of the submarine. 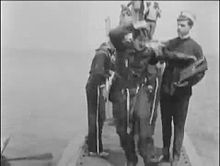 Now, at about half-way through, the title of the movie starts to make sense. Syd, using his information and purloined papers, masquerades as the commander and takes charge of the submarine, pursuing a “treasure ship” which mostly seems to be loaded with passengers. In the meantime, the rebellious first mate makes an abortive attempt to drown the new commander by submerging while he is on deck, leading Syd to hang on to the key necessary for descent. He demands the boat’s surrender and takes men aboard to plunder its safe, but the radio operator gets off an SOS, summoning a navy gunboat. Syd and his crew retreat to the submarine, and manage to fire off a torpedo, with Syd clinging on. He loses the key needed to submerge the sub, so they try to fight with a “submarine gun” that seems pretty pathetic against the gunboat’s cannon. The sub is sunk, and Syd sticks his head out a porthole, to be bitten by a large fish or shark.

At the time of release, submarine warfare was no joking matter in the US, as Germany had moved to “unrestricted warfare” in the Atlantic and sank the RMS Lusitania in May, 1915 (the movie came out in November), killing more than 100 American passengers. Syd’s character, therefore, is hardly sympathetic, and there may have been some satisfaction in seeing him get his comeuppance at the hands of a navy vessel. To be sure, all the violence in this movie is cartoonish slapstick, and no one is shown in danger of actually drowning or being blown up, but there may be an element of propaganda to it nonetheless. I wouldn’t rate it as highly as Charlie’s better work, but it is an interesting and relatively large budget Keystone comedy of the time.