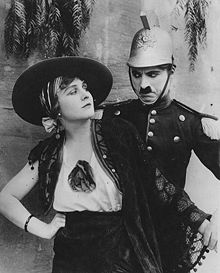 I’m going a bit backward, reviewing this one now, since it was actually the last movie Charlie Chaplin made in 1915, but since I just did the DeMille “Carmen” last night, it’s appropriate. So far as Chaplin goes, the story is this: at the beginning of 1914, he met Mack Sennett and signed up with Keystone, rapidly producing a few dozen shorts and “Tillie’s Punctured Romance” and becoming a star in the process. At the end of the year, he demanded a raise to $1000, which is a lot more than I make, but not considered all that much for a movie star nowadays. Sennett refused him, so he signed with Essanay, who came up with the money and gave him even better exposure. By the end of that year, he was a worldwide mega-star (I just read a letter in the “Moving Picture World” today from South Africa, talking about how much they all loved him there), and wanted still more money. Once again, Essanay refused the raise, so he signed with Mutual for ten times as much. But before his Essanay contract ran out, he made this spoof of the popular opera/novel/movie(s).

So how is it? In comparison to Chaplin’s Keystone work, it’s leaps and bounds ahead. The story is more complicated, his style is more honed, and there’s more room for his co-stars to get in some good parts. The filmmaking of 1915, as I’ve mentioned several times this year, is much closer to what we expect in a modern film, and I think there’s actually more use of close-ups and multiple shots within scenes than we saw in DeMille’s version. The plot is basically a speeded-up version of that one, with gestures, costumes, and title cards borrowed or deliberately sent up at several points. Edna Purviance, who plays Carmen, is perfect, both as a compliment to Farrar’s sophisticated yet bestial sensuality, and as a skilled comedienne with a sense of timing to match Chaplin’s. Chaplin is more or less doing his “Little Tramp” character in a uniform here, and in the year since he left Keystone, he’s made that character more sympathetic and more believable. A running gag involves the fact that his full-size sword sheath contains only a tiny dagger, which he tends to whip out at inopportune moments. No Freudian humor here or anything. I’m looking forward to getting fully caught up with Chaplin’s Essanay career as the year progresses.

You can watch it for free: here (Sorry, no music)