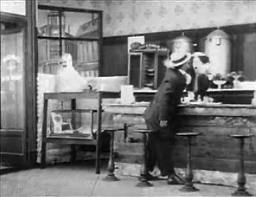 This fairly primitive slapstick comedy starring Ben Turpin has the distinction of being believed to contain the first example of a character hitting another character with a pie in the face for comedic effect. It wouldn’t surprise me if there actually is an earlier example, or indeed if the trope had been invented in vaudeville before hitting the movies, but this is the earliest one I’ve seen so far, so I’ll go along with it. The plot is quite thin. Turpin is a goofy-faced “masher” who goes to a variety of establishments which employ women and annoys them until they take revenge or humiliate him in some way. I laughed as much with surprise as with humor when the lady at the general store has him removed on a hand truck. The bit with him sitting on a pair of scissors at the manicurist is made funny by his body language, though it’s drawn out more than necessary. In addition to the pie-in-the-face at the restaurant, he is also sprayed with seltzer (another classic bit, though I’m not sure if this is the first instance) by the bartender and several patrons at a bar. It struck me that there is a kind of statement here about the harassment women working with the public had to put up with, and the humor comes in their being able to defend themselves, but Mr. Flip is certainly not a charming character.